Start a Wiki
watch 04:10
The Loop (TV)
Do you like this video?
Suzy Maxwell (Mimi Rogers) was a villainess from Ash vs Evil Dead, appearing in the series' second episode, "Bait" (airdate November 7, 2015).

Suzy was the deceased mother of Kelly Maxwell, but she somehow returned in the end of the pilot episode. Suspecting that Suzy is a Deadite, Ash and Pablo head to the Maxwell home, where they see Kelly with both of her parents. Suzy claimed to have lost her memory after accidentally driving her car off a bridge, which actually killed her. While having dinner at the house, Ash continuously tested Suzy with a series of questions, which Suzy answered to perfection. After the questioning was done, Ash decked Suzy, but it was at that moment that his suspicions were proven correct and Suzy was revealed as a Deadite. Suzy killed her husband with a fork through his skull, and then escaped upstairs while snarling at the trio.

Kelly finds Suzy upstairs and the two embrace before Ash and Pablo enter. At that moment, the evil Suzy stated that she purposely drove off the bridge to get away from Kelly, before reverting to her Deadite form. Suzy fought with Ash and wasn't phased by a knife driven through her head by Pablo. Suzy removed the knife and moved towards Pablo and Kelly, but she would be gutted by Ash and his chainsaw hand, which he later used to decapitate Deadite Suzy. 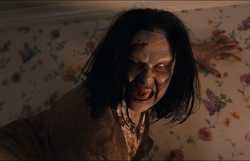 Suzy as a Deadite
Add a photo to this gallery
Retrieved from "https://femalevillains.fandom.com/wiki/Suzy_Maxwell_(Ash_vs_Evil_Dead)?oldid=94132"
Community content is available under CC-BY-SA unless otherwise noted.