Suzie Hayakawa (Judy Dan) is one of the main antagonists of the Season 5 two-part episode "And Baby Makes Four" from the 1960s crimefighting comedy show "Get Smart".

Suzie, along with Dr. Kruger, are KAOS agents posing as medical staff at the Sunny-Slope Sanitarium, which has been turned into the new secret headquarters for the organization. Their orders are to wait for the arrival of "Simon the Likeable", the most ruthless, cunning and charming KAOS agent of them all.

Heroes Agent 86 (Maxwell Smart) and Agent 99 eventually arrive at the Sanitarium by mistake, after the former agent accidentally receives a map meant for Simon to inform him of the new location. 99 is about to give birth, and the two unwittingly believe that they've arrived at the desired hospital for her to deliver. The phoney doctor and nurse, however, recognize the agents from Control immediately. Suzie attempts to kill 99 by injecting her with a deadly substance. Fortunately, 86 manages to escape Kruger's clutches and shoots and destroys the syringe in the nick of time.

Sometime later, the two agents arrive at the real hospital, where the Control chief and his subordinate Larabee are waiting. As 99 is taken off to the delivery room, Suzie, Kruger and a third KAOS agent, Finster, arrive and engage the three men from Control. 86 believes the enemy agents to be "outnumbered" for several reasons, one of which being that Suzie is a woman. A swift (and painful) demonstration of her martial arts skills, however, leads him to quickly change his mind. The six individuals brawl it out in the lobby, until Chief gains the upper hand. Larabee then takes the KAOS trio down to Control headquarters at gunpoint. 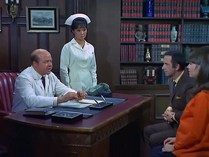 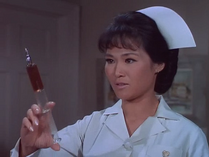 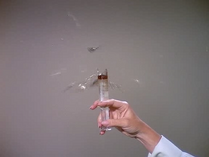 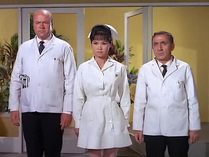 KAOS does not give up that easily, however... 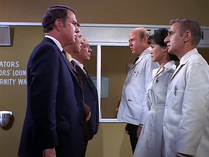 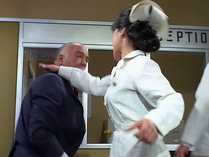 ...and Suzie gives both Max and the Chief a taste of what her hands can do. 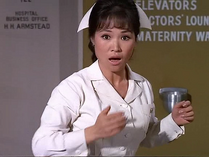 A stunned reaction after overzealously attacking Kruger as well. 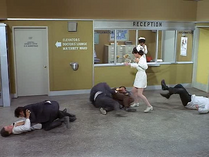 Meanwhile the receptionist announces that 99 has just had twins. 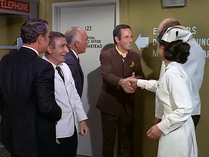 Suzie and the KAOS agents take a brief moment to congratulate the lucky husband before resuming their beatdown. 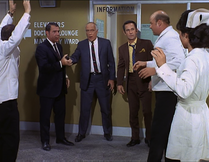 Suzie and her KAOS pals surrender to CONTROL, and prepare to face justice.
Add a photo to this gallery
Retrieved from "https://femalevillains.fandom.com/wiki/Suzie_Hayakawa_(Get_Smart)?oldid=105225"
Community content is available under CC-BY-SA unless otherwise noted.