Start a Wiki
watch 01:48
The Loop (TV)
Do you like this video?
Susan Grace (Vanessa Angel) is a hidden villainess from the 2005 Lifetime film, Criminal Intent. She is a divorce attorney who represented Angela Major during her split from husband, Devon.

However, Susan was later revealed as Devon's partner in his shady business dealings, as well as his illicit lover. After they were caught making out by Angela, their business partnership became threatened when Angela planned to turn over records of their deals, and that prompted the villainous couple to plot Angela's murder. Susan posed as Angela and called 411 looking for Devon, which opened the door for Devon to appear at Angela's home, where he murdered his ex-wife when she refused to give him the records.

Following Devon's arrest, Susan became Devon's defense lawyer, hiding her heel persona by acting as a woman mourning her friend's death. Susan was later attacked by a masked assailant who was after Devon, and she vented and voiced her concerns to her assistant, Marg Anderson, at her home. She spotted a business card belonging to Kirsten Sorenson (who was prosecuting against Devon), and after learning that Kirsten and Marg had conversed, the evil Susan murdered Marg; stabbing her to death and leaving an ace of spades playing card at the scene, which was exactly what occurred in Angela's murder. After Kirsten found Marg, she called Susan, who acted shocked at the scene. Susan's plan was to make it seem like someone else murdered Angela, and it resulted in Devon being released.

It was after Devon's release that Susan was revealed as a villainess, as they were shown in a champagne toast boasting about their villainous deeds. After revealing that she killed Marg, Susan received $15 million from Devon in her account, and the pair planned to escape to Mexico, while also looking to get rid of the knife that they used in each of the murders. However, Kirsten and Treasury Agent Mark Fairfield caught on to the couple's schemes in the film's climax, and they appeared at Devon's home with a search warrant. Kirsten also provided Susan's recorded call to 411, and following this, the villainess held Kirsten at knifepoint, while revealing that she killed Marg. Susan stated that she and Devon were leaving, but Mark revealed that Devon made a deal to turn over all records. An angered Susan attempted to kill Devon, but she was stopped and subdued by police, who arrested both of them. At trial, both Susan and Devon pled guilty, with Susan claiming that Devon forced her into colluding with him. 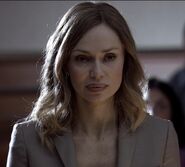 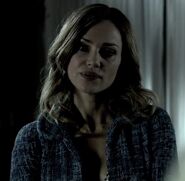 Susan during her villainous reveal

Susan on trial for her crimes
Add a photo to this gallery
Retrieved from "https://femalevillains.fandom.com/wiki/Susan_Grace_(Criminal_Intent)?oldid=172557"
Community content is available under CC-BY-SA unless otherwise noted.