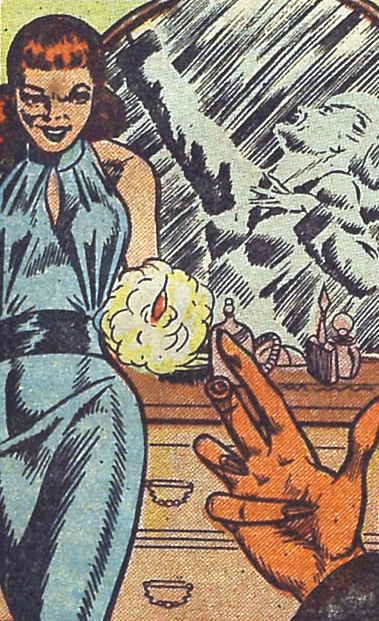 Susan Buell is the manipulative villain and central character from the short story "Susan and the Devil" contained in Crime Mysteries #9.

Susan first marries a wealthy old man named Jed Hawkins after convincing him to divorce his wife. To ensure that her new husband's fortune becomes her own, she soon afterward seduces Mark, the son of Jed, and persuades him to kill his father. With that taken care of, Susan begins having an affair with Mark's best friend, Randy Breen. Devastated by her betrayal, Mark commits suicide shortly after this discovery.

Randy becomes so infatuated with Susan that he begins (via her suggestion) stealing money from his employer so that he can buy her luxurious items. Once she is satisfied with the gifts, she proceeds to turn him into the police for his crimes. When Randy hires James Gell, as his defense lawyer, Susan uses her charms to turn the attorney against him, and Randy is sent off to jail.

Betty Blake soon stumbles upon this most recent affair and curses Susan out, claiming that she will never concede James, who happens to be her fiancee. Susan allows the woman to say her piece, and then calmly invites her over to her appartment to talk things out. When Betty shows up, Susan murders her with a pistol. Susan is arrested and brought to trial, but uses her sexual magnetism once more to convince the male judge and jurors to declare her innocent.

Following the acquittal, Randy Breen manages to break out of prison and, with revenge on his mind, heads towards Susan's home. Once there, he unleashes his pent-up rage and kills her with a handgun. In purgatory, Susan is given an all-female jury, which reaches the verdict that she be sent to Hell. Susan drops through the trapdoor without fear, confident that she would be able to use her sex appeal to wrap even the devil himself around her little finger. However, upon arrival, Susan is horrified to discover that The Devil is, in fact, female.

Retrieved from "https://femalevillains.fandom.com/wiki/Susan_Buell_(Susan_And_The_Devil)?oldid=160736"
Community content is available under CC-BY-SA unless otherwise noted.