Start a Wiki
watch 01:48
The Loop (TV)
Do you like this video?
Susan Brown (Stacy Edwards) is the true main villainess from the 2014 film, The Devil's Hand (alternately titled, Where the Devil Hides).

Susan was one of the six women who gave birth to baby girls on June 6, 1994, beginning a prophecy that stated that one of them would become the "Devil's Hand," an emissary of Satan, on her 18th birthday. One of the girls, Rose, is killed by her mother after birth, leaving Susan's daughter, Mary, as one of the five remaining girls. Susan noticed that Mary was having potentially deadly seizures, and prayed to God for her to get well, only for her to continue to suffer. As a result, Susan renounced God and ended up ex-communicated from the community they resided in.

Nearly 18 years to the day later, Susan turned heel by returning to the community under a hidden cloak and killing each of the four other girls, as well as Mary's evil stepmother, Rebekah. Mary had believed her mother to be deceased until her father, Jacob Brown, told her the truth. Afterwards, Susan reunited with Mary, who was driven there by Trevor, and Susan gave the impression that Elder Beacon, a religious fanatic, was the one killing the girls. Susan sees Mary again minutes before midnight on her 18th birthday and confesses everything; stating that she killed the other girls to change the demonic prophecy and making sure that Mary becomes the Devil's Hand and lives at full strength. After her confession, the evil Susan watched as Mary kissed Trevor and later killed him by snapping his neck, fulfilling the Satanic prophecy and making Mary the Devil's Hand. 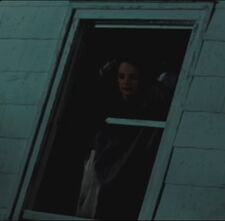 Susan committing her series of murders 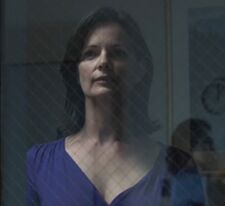 The villainous Susan watching Mary kill Trevor
Add a photo to this gallery
Retrieved from "https://femalevillains.fandom.com/wiki/Susan_Brown_(The_Devil%27s_Hand)?oldid=170490"
Community content is available under CC-BY-SA unless otherwise noted.