Start a Wiki
watch 01:48
The Loop (TV)
Do you like this video?
Sunny is a WWE Hall of Famer best known for her career as a villainous manager.

After working at Smoky Mountain Wrestling, Sunny joined the World Wrestling Federation in 1994, where she played the role of a commentator named Tamara Murphy before beginning her Hall of Fame career as a manager. Sunny's first managed The Bodydonnas, Skip and Zip (the former being Sunny's real life boyfriend, Chris Candido. She managed the duo to the WWF Tag Team Championship at WrestleMania XII, defeating The Godwinns to win the titles. After they lost the belts back to the Godwinns, Sunny betrayed The Bodydonnas in favor of the newly crowned champions, beginning a trend that established Sunny's ambitious and gold-digging heel character. The villainous Sunny later betrayed the Godwinns and helped The Smoking Gunns defeat them for the tag titles, and later fired the Gunns when they lost the titles.

Sunny left the WWF in 1998 after a brief run as a babyface manager for LOD 2000, and after stints in WCW and ECW, she frequented the independent circuit, mainly under her real name, Tammy Lynn Sytch.  Among the promotions Sytch appeared for was Women Superstars Uncensored in December 2007, defeating Alicia to capture the WSU Championship, only to lose the title to Nikki Roxx on March 21, 2008.

One day after losing the title, Sytch appeared at WSU's J-Cup Tournament and introduced Dawn Marie (Sytch's former ECW rival) as Becky's first round opponent. Despite being cheered in her intro, Sytch turned heel and acted as a manager for Dawn, cheering and supporting Dawn's heel tactics towards Becky. On one occasion, the evil Sytch attacked Becky while Dawn had the referee distracted, cementing Sytch as a villainess at the event. Despite Sytch's villainous actions, Dawn ended up disqualified when she was choking out Becky. 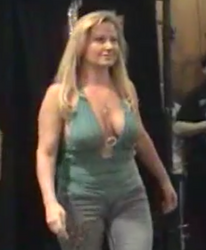 Sytch as a villainess attacking Becky Bayless
Add a photo to this gallery
Retrieved from "https://femalevillains.fandom.com/wiki/Sunny_(WWE)?oldid=139136"
Community content is available under CC-BY-SA unless otherwise noted.