Suette (Leilani Sarelle) plays a local beauty queen who is the antagonist for Melaina Buller (Bridget Fonda), in the 1989 movie "Shag". The movie is set in Myrtle Beach, South Carolina during the summer of 1963.

Suette plays a beauty queen and white trash townie who loses the attention of her boyfriend "Big Bob" (Jay Baker) to Melaina at the local dance place called The Pavillion. Suette is catty with Melaina, and later in the bathroom, Melaina overhears her plan to compete in the Miss Sun Queen Pageant. As a result, she openly defies Suette by telling her she is also going to compete in the pageant, and vows to beat her.

Melaina leaves The Pavillion with Big Bob, and Suette and her girlfriend Nadine (Carrie Hamilton), track Melaina down at inspiration point. They pull her out of a car spraying her with shaving cream, covering her with feathers and forcing alcohol down her throat. They leave her there lying on the ground.

The next day, Suette appears at the pageant and plays the exact same song and dance routine that Melaina had wanted to perform but was talked out of by her friends because it was a bit risqué. Suette performs a provocative dance to the tune of "Dixie", draped in a Confederate flag bikini with her perfect body. Suette wins the title of Miss Sun Queen.

Suette and Nadine are later blocked from attending a party at Melaina's friends house, and subsequently TP the house with toilet paper.

At the Shag contest the next day, Suette is on ornament duty for the master of ceremony at the shag dance contest. She is snubbed, as Melaina and her friends get all the attention. 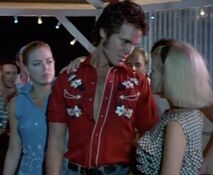 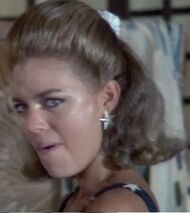 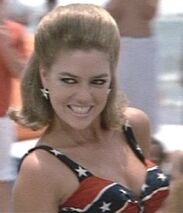 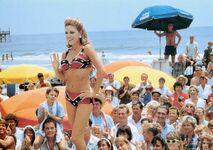 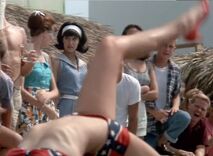 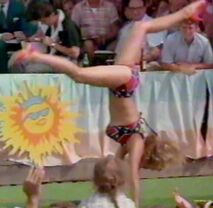 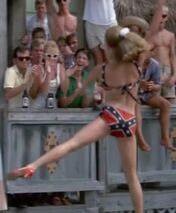 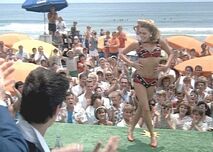 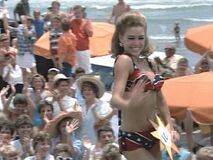 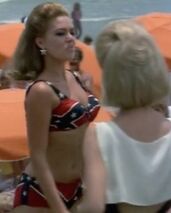 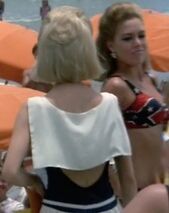 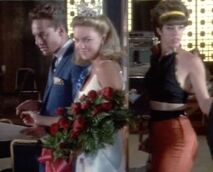 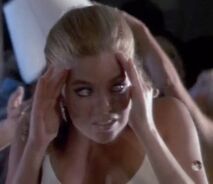 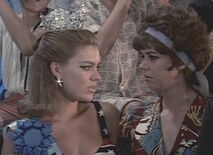 Add a photo to this gallery
Retrieved from "https://femalevillains.fandom.com/wiki/Suette_(Shag)?oldid=201541"
Community content is available under CC-BY-SA unless otherwise noted.