Stromberg’s Assistant (Marilyn Galsworthy) was a secretary in the 1977 James Bond film, “The Spy Who Loved Me”.

She was an unnamed assistant who worked for the evil Karl Stromberg (Curt Jurgens).  In the film, Stromberg is meeting with the two inventors of the secret submarine tracking system to tell them they’ve been paid.  However, someone has been trying to sell the plans to another bidder.  The assistant is in the room taking notes on the meeting and is wearing a brown dress with a scarf tied around her neck, with brown pumps.  She has curly blonde hair worn above her shoulders.

Stromberg suspects his assistant and requests her to leave the dining room. She obeys and keeps smiling, unaware of her boss' suspicion.  She enters the elevator and starts to worry for herself when she get locked in, and Stromberg presses a button which makes the floor give away and she slides into a great white shark tank, revealing her white panties when she falls. She starts to scream with fear and we overhear on an intercom Stromberg informing her that he knows of her betrayal, and she is going to pay the penalty. She desperatly tries to swim and cries for mercy, but the shark swims after her and bites her while she shouts with pain. The unfortunate girl is eventually eaten by it and looses her life. This leaves a lasting impression on the two men who are forced to watch her agonizing punishment. [Stromberg has Dr Beachmann and Prof Markovitz escoted to one of his personel heliocpters; when it is over the sea he destroys it. He then has a message sent to the relataives telling that the two men have been lost at sea and cancels the Bank payment]

Later, when James Bond (Roger Moore) meets with Stromberg, he notices her chewed off arm at the bottom of the fish tank. 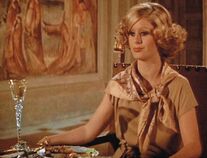 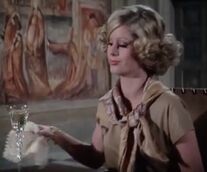 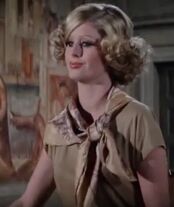 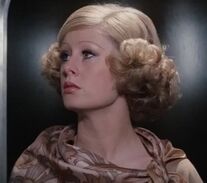 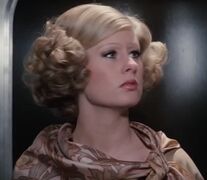 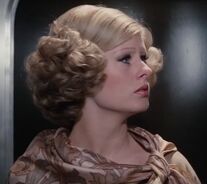 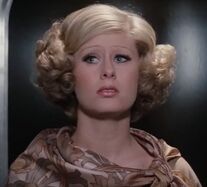 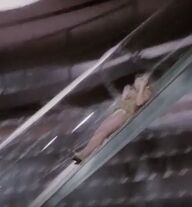 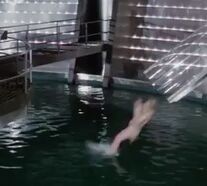 The soon to be killed Prof Markovitz [Milo Sperber]' and Dr Beachmann [Cyril Sharps]
Add a photo to this gallery
Retrieved from "https://femalevillains.fandom.com/wiki/Stromberg%27s_Assistant_(The_Spy_Who_Loved_Me)?oldid=204071"
Community content is available under CC-BY-SA unless otherwise noted.