Stephanie Hitcher (Alla Korot) is the main villainess from "A Passion for Murder," episode 4.20 of Diagnosis Murder (airdate April 3, 1997). She is a rep for Benchmark Pharmaceuticals, and she was in a relationship with the company's promoted regional sales director, Dave Chambers; a relationship that began when Dave was married.

In the beginning of the episode, Dave informed Stephanie that he intended to announce their engagement, but in response, Stephanie turned heel and pushed Dave in front of a moving car, which struck Dave (non-fatally). Stephanie gave an evil smirk at Dave (cementing her heel turn), after which Dave ended up hospitalized due to the accident and operated on by Jesse Travis. While at the hospital, Stephanie feigned hysterics over Dave, but it was there that she met Dr. Tod Grimes, a highly important member of Community General.

A relationship quickly formed between Stephanie and Tod (who was also married), and they engaged in a tryst together. However, once Tod informed Stephanie that their sexual relationship should end, the femme fatale persistently pursued Tod, even going as far as making herself look like Tod's wife, Kim, after meeting her. Later on, the evil Stephanie visited Dave and informed him that she was leaving him for Tod, while belittling Dave in the process. Angry over being dumped, mainly due to the fact that he left his wife to be with Stephanie, Dave went to Tod's home and shot who he believed was Stephanie through the window, though the woman he killed was actually Kim.

After Mark and Jesse got the truth from Dave, everything started to add up. Dave was an unknowing pawn in Stephanie's evil plan to eliminate Kim; a plan that included her makeover to look like Kim. Stephanie informing Dave about her new relationship was another key part in her plan, as was bailing out Tod from jail after he was arrested for assaulting her and Steve. Tod had blamed Stephanie for Kim's death and allowed her to bail him out so he could kill her, which he set on doing at his home when the villainess visited Tod. Stephanie snatched the gun from Tod's possession and pointed it at him with intent on killing him, only for Steve to enter and arrest her. 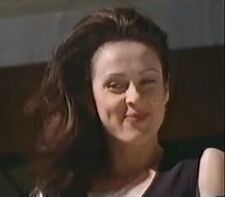 Stephanie cementing her heel turn with an evil smirk 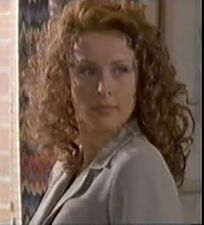 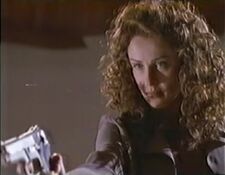 Add a photo to this gallery
Retrieved from "https://femalevillains.fandom.com/wiki/Stephanie_Hitcher_(Diagnosis_Murder)?oldid=209405"
Community content is available under CC-BY-SA unless otherwise noted.