Start a Wiki
watch 01:48
The Loop (TV)
Do you like this video?
Stella Warden (Karen Carlson) is the henchwoman for the cruel dictator Kaleel (Jack Palance) on the Planet of the Slave Girls episode of the TV series Buck Rogers in the 25th Century.Flying back from the stargate, Buck and Wilma Deering encounter brusque Major Duke Danton (David Groh), who immediately resents Buck’s hotshot attitude. The two become even more antagonistic when Wilma assigns Buck to train Danton’s cadets, 20th century style, but all that becomes secondary when an epidemic of a nerve disorder spreads among he Directorate’s fighter pilots. The culprit appears to be poisoned food discs, but the search for an antidote is stymied when the head researcher’s computer is destroyed by a fleeing saboteur, Stella Warden a female research assistant and flys back to Vistula to report to Kaleel. Buck and Wilma journey to the planet Vistula, source of the toxic soy protein, but there they discover that the governor (Roddy McDowall) is purchasing slave labor from a messianic leader named Kaleel (Jack Palance), who is brainwashing the masses and destroying the insurgents with his special powers that feed on fear. One of the slaves, Ryma, helps Buck and the others uncover Kaleel’s plot, which also includes using a massive starship fleet to destroy Earth’s immobilized forces. It becomes a race to the finish summon up the Directorate’s few remaining fighters and send them to attack Vistula’s, as well as find Kaleel and help the revolutionaries and his oppressive reign.Kaleel and Stella think that their star fleet will easily defeat Buck and his small ragtag group.But as it becomes clear that the star fleet will be defeated Stella hastens Kaleel to escape the planet with her.But as they are trying to make their escape Buck goes face to face against his evil nemesis and defeats him and Stella as they are surronded by their former slaves. 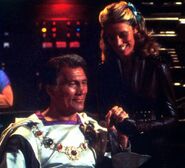 Stella captures Wilma
Add a photo to this gallery
Retrieved from "https://femalevillains.fandom.com/wiki/Stella_Warden_(Buck_Rogers_in_the_25th_Century)?oldid=176489"
Community content is available under CC-BY-SA unless otherwise noted.