Stella Andre (Helen Slater) is the main villainess from Jane Doe:  The Harder They Fall (airdate March 4, 2006). She was the interim CEO of a major food company, but as revealed later on, she acquired the position by having the past CEO, Melville Hornung, killed. She was in a relationship with Melville, and then found his long lost biological son, Doug Maynard, and coerced him to kill Melville. To cover her tracks, Stella also drugged Jim Monroe with laced up cookies in a gift basket, and set him up for the murder.

Cathy Davis caught Stella on the rooftop of the building, where she interrogated her regarding her evil plans. After arrogantly admitting to everything, the evil Stella pointed a gun at Cathy with intent to kill her. Stella pulled the trigger, with her shot striking Jim, who dove to protect Cathy. After the melee, Stella was quickly apprehended and arrested.

Stella pointing a gun at Cathy 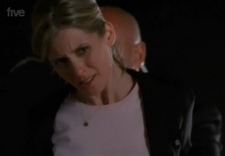 Stella defeated and arrested
Add a photo to this gallery
Retrieved from "https://femalevillains.fandom.com/wiki/Stella_Andre_(Jane_Doe:_The_Harder_They_Fall)?oldid=178784"
Community content is available under CC-BY-SA unless otherwise noted.