Start a Wiki
watch 01:38
The Loop (TV)
Do you like this video?
Stefana is an arch villain's henchwoman in the British James Bond newspaper comic strip.

Bond is investigating the disapppearance of a number of young women. He discovers a "school for spies" on a private island off Italy run by an obese villain, Signor Uccelli. Uccelli trains and subliminally conditons the women to be agents; they are then hired out to various hostile intelligence agencies and criminal interests. When the women are deemed of no use any more, or have become a liability, they are brought back to the island...and totally disposed of - eaten alive by Uccelli's "pet" condors. Bond and his ally, black private eye Crystal Kelly, sabotage Uccelli's evil operation.

Disarmed and wounded by

her in a fight;

Stefana is a tall beautiful Caucasian woman with short brushed back dark hair. She seems to be in her early 30's. She wears a black bikini or light capri style pants with a shirt.

Stefana is Uccelli's ruthless right hand woman in the running  of his operation. She personally helps with the appalling murders Uccelli commits with his condor birds. She becomes especially vengeful against Bond who has killed her boyfriend (the man had attempted to murder Bond).

Stefana and a henchman hold guns on Bond and a young woman, as Uccelli is about to scent spray them for a condor attack; suddenly Crystal Kelly interrupts the murderous procedings. Stefana is about to shoot Crystal, but the private eye throws a boat hook at the villainess, hitting her in the shoulder  -  the  gun falls from the stricken Stefana's hands. A melee ensues in which Crystal fights with the wounded Stefana. A karate chop from Crystal sends Stefana falling into the sea (presumably to drown). Uccelli, now himself scent sprayed by an angry Bond, committs suicide with a gun Bond has thrown him - just before the condors land on the evil spymaster. 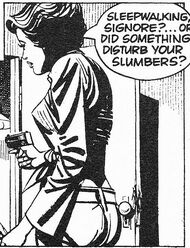 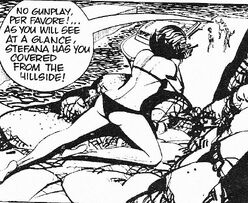 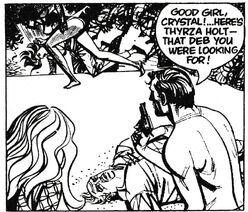 Crystal Kelly finishes Stefana
Add a photo to this gallery
Retrieved from "https://femalevillains.fandom.com/wiki/Stefana_(James_Bond)?oldid=165898"
Community content is available under CC-BY-SA unless otherwise noted.