Start a Wiki
watch 01:51
The Loop (TV)
Do you like this video?
Stacy Keibler is a former wrestler and manager who competed in WCW and WWE, where she portrayed a villainess.

Her most notable feature was her 41.5 inch legs, which she would often show off in very short skirts. The leggy Stacy would frequently use them to her advantage, whether it was by distracting other wrestlers to help the men she managed win their matches, or by using them to inflict pain on her opponents when she stepped into the ring.

Stacy had a bitchy personality and was very seductive. The leggy villainess was more than happy to use her good looks and assets to help her achieve her wicked goals. She also had a sadistic side, as she loved watching other people’s pain and misfortune, and enjoyed mocking them by pointing and laughing. Whether it was watching her men cause damage in the ring, the sight of people getting driven through tables or seeing one man get beaten and bloodied with weapons at the hands of six other men, Stacy derived pleasure from watching it.

Throughout her career the evil Stacy managed a number of different villains, including David Flair, Shawn Stasiak, The Dudley Boyz and Test. Stacy liked to use various underhanded tactics to help her men win their matches, these ranged from seductive distractions to getting physically involved herself. Stacy wasn’t afraid to attack other men when the opportunity presented itself and she enjoyed dishing out low blows, eye rakes and chokes if the referee wasn’t looking.

Greed 2001: Throwing a spray for Shawn Stasiak to use as a weapon

RAW 3rd September 2001: Interfering in the match by tripping Spike

No Way Out 2002: Getting involved in the match, which angers Lita

RAW 28th October 2002: Slapping the ref before low blowing Goldust
Add a photo to this gallery

Stacy started her career in WCW as a Nitro Girl dancer called Skye, but she very quickly broke away from being just a dancer and established herself as the sexy, seductive, short skirted business suit clad manager Ms. Hancock. As Ms. Hancock, she would initially manage tag teams and would frequently dance seductively on the announcer table to distract her team’s opponents. She later set her eyes on David Flair, and ended up stealing him away from his girlfriend Daffney. The wicked Ms. Hancock continued to torment the woman whose boyfriend she stole, and the two would feud throughout the Summer of 2000. Soon afterwards she would target Misfits In Action member Major Gunns, before disappearing from WCW until the new year. When Stacy returned in 2001 she dropped the name Ms. Hancock and started managing Shawn Stasiak. Shawn and Stacy would feud with Bam Bam Bigelow, with the evil Stacy using underhanded tactics to help Stasiak win 2 matches from a series of 3.

Stacy Keibler as the evil Ms. Hancock in WCW

Nitro 26th June 2000: Using her long legs to kick Daffney in the head

Bash At The Beach 2000: Kneeing the referee in the balls
Add a photo to this gallery

Stacy joined WWE in June 2001 as a member of the Alliance, a villainous group co-led by the evil Stephanie McMahon, who planned on taking over WWE. She teamed up with the evil Torrie Wilson, a fellow Alliance member, and together they targeted WWE women such as Trish Stratus, Lita, Molly Holly and Jacqueline. Stacy and Torrie were later joined by villainous WWE traitor Ivory, who took the wicked duo under her wing and helped them injure Lita’s knee in a 3 on 1 backstage assault. Stacy also had a brief reunion with Shawn Stasiak and tried to help him win his matches using sneaky methods, like she had done previously in WCW.

In September 2001, Stacy began feuding with Torrie, after Torrie defected to WWE and began dating WWE wrestler Tajiri. Stacy wondered what Torrie saw in him as Stacy thought he was “short and not that much of a man”. Stacy said she could have any man she wanted and would find someone to beat up Torrie’s man. The feud continued with a couple of mixed tag matches involving the women and with Stacy sneak attacking Torrie backstage too.

During this time, she would become the manager for the Dudley Boyz tag team, and was given the nickname the Duchess of Dudleyville. Stacy really enjoyed seeing people get driven through tables, and at one point ordered the Dudley Boyz to put her rival Torrie through a table. Stacy took great pleasure from Torrie’s injury and gloated, pointed and laughed at Torrie as she was taken away on a stretcher. A few days later on Smackdown, Stacy watched with glee as the Dudley Boyz threw Spike to the outside of the ring and through a table, as commentator Michael Cole acknowledged how wicked Stacy was and called her “evil”. Torrie would eventually get some revenge by defeating the evil Stacy at No Mercy 2001. 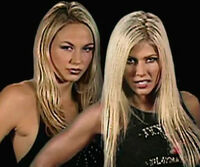 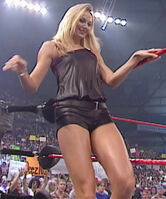 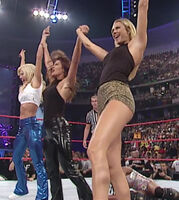 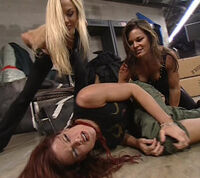 RAW 3rd September 2001: ...which angers his girlfriend Molly, who gets some of the evil Stacy 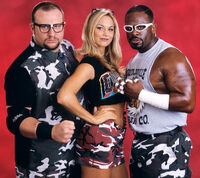 Stacy as the evil Duchess Of Dudleyville alongside The Dudley Boyz 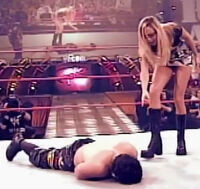 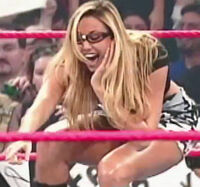 RAW 8th October 2001: Taking pleasure at the sight of an injured Torrie after being put through a table

RAW 8th October 2001: Taking pleasure at the sight of an injured Torrie after being put through a table 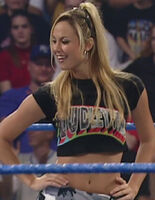 Smackdown 18th October 2001: Torrie returns to get some revenge, and humiliates the evil Stacy

No Mercy 2001: Disrobing at the start of the match

No Mercy 2001: Grabbing a whip to use on Torrie

No Mercy 2001: Whipping Torrie as the referee tries to stop her

No Mercy 2001: Choking Torrie between her deadly long legs 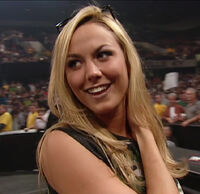 RAW 29th October 2001: Pleased by another victory for her team

Vengeance 2001: The Duchess of Dudleyville in the middle of the ring 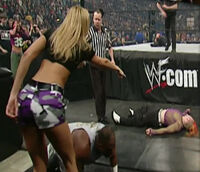 No Way Out 2002: Taunting a fallen Jeff Hardy 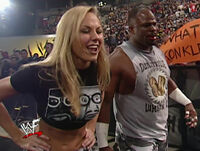 No Way Out 2002: Enjoying the sight of a fallen Jeff Hardy
Add a photo to this gallery

Stacy’s managerial role with the Dudley Boyz ended in March 2002 and soon afterwards she was drafted to Smackdown in the first draft lottery.

The villainous Stacy immediately set her eyes on the man in charge, and seductively and successfully applied to be Vince McMahon’s personal assistant. During her time alongside the boss she lied that the young rookie Randy Orton had forced himself on her, which caused Orton to be punished with a match against the mean veteran Hardcore Holly. A few weeks later she sat at ringside and enjoyed watching the rookie Orton get beaten up some more, this time by Test. She also had a personal ringside view when Triple H was ambushed in a 6 on 1 beatdown by some of McMahon’s henchmen. The sadistic Stacy looked on and grinned with pleasure as Triple H was beaten and bloodied in the assault.

At Judgment Day 2002, she was given the chance to challenge for the WWE Womens Championship but ultimately failed, despite having McMahon’s goons Reverend D-Von and Batista in her corner. She also continued her rivalry with Torrie Wilson, and even tried to throw Torrie off the stage on an episode of Smackdown, but a referee saved Torrie just in time and stopped Stacy’s evil plan from being a success.

In August 2002, Stacy moved to RAW and immediately began feuding with the women there. She was given the role of being a special referee a couple of times and used them as opportunities to abuse her power. The wicked Stacy would count quickly when her fellow bad girls were making pin attempts, and count slowly when the good girls tried the same. She would also feign arm injuries when the chance to make the decisive 3 count came. In another role as a special referee, Stacy was put in charge of a match between Test and D’Lo Brown. At the start of the match Stacy laid down the law to both competitors before slapping D’Lo in the face. She would make slow counts when D’Lo tried to win the match and also started tying her shoelace when D’Lo hit his finisher and went for the pin. After arguing with Stacy about her actions, D’Lo was smashed in the face by a big boot from Test, which Stacy thoroughly enjoyed watching. She then made a quick 3 count to help the villain Test win the match.

Stacy continued her alliance with Test, and soon became his manager, as well as his girlfriend. She enjoyed watching him rip apart fan favourites, such as the heroic Hurricane, and loved to taunt them at ringside by pointing and laughing at them. She would also use her deviousness to help him win matches, such as when she delivered a low blow to Goldust. But that wouldn’t be the only time Stacy inflicted pain on a man by going low, as she also fired from a t-shirt cannon directly into Steven Richards’ balls from close range. Richards collapsed and rolled around in agony as Stacy took great pleasure from his pain and pointed and laughed.

Smackdown 9th May 2002: Sadistically enjoying the sight of Triple H being bloodied and beaten

Smackdown 27th June 2002: Trying to throw Torrie off the stage

RAW 18th November 2002: Stacy shoots Steven Richards and takes great pleasure from his pain
Add a photo to this gallery

Retrieved from "https://femalevillains.fandom.com/wiki/Stacy_Keibler_(WWE)?oldid=129523"
Community content is available under CC-BY-SA unless otherwise noted.