Stacy Balfour is a minor villainess in the episode "Den of Thieves" from the series Renegade. She is played by Lisa Stahl.

In this episode, Reno Raines assumes the identity of a crooked cop who threatened to kill his former partner and friend, IA officer Elaine Hart (Kim Johnston Ulrich), and recently died in an accident. Stacy is the girlfriend of a Robert Miranda, a gangster who comes to meet the assumed dirty cop at his country lodge. Raines and Elaine have to act as if they were an outlaw couple just like Robert and Stacy. The attractive blonde sets her eye on Raines and plans to pinch him from Elaine. Before long, Stacy finds out about Raines' true identity and blackmails him into sharing the booty with her. She thereby reveals her evil nature by committing blackmail, betrayal and theft. Raines reluctantly agrees, but talks Stacy into helping him to break open a vault in the house. After successfully finishing the job, he responds to Stacy's flirtations by kissing her and tying her hands behind her back with a rope. Stacy eagerly reciprocates and offers no resistance, probably assuming that Raines is about to tie her up for sex. It is only when the ropes tighten around her wrists that she realizes that she has, in fact, been tricked into captivity. Now unable to fight back, she can only scream and kick her legs in fury as Raines carries her off over his shoulder, to lock her up in a closet.

In a later scene, Elaine opens the closet without knowing that a bound and (by now) gagged Stacy is shut inside. Stacy tries to take advantage of the situation by storming out in order to escape, but Elaine quickly takes control by knocking her out by a single punch. As Stacy lies unconscious, the closet door is once more shut on her. Her subsequent fate is not known. 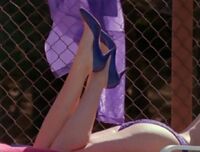 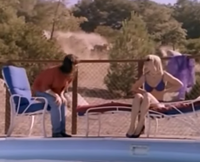 I'm sorry! I'm a blonde and it's really hard to close the bikini top... 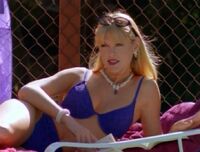 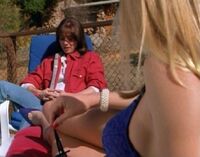 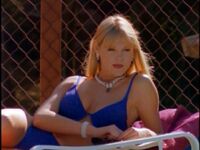 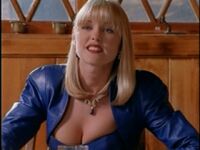 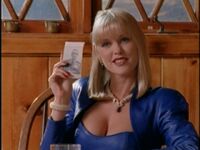 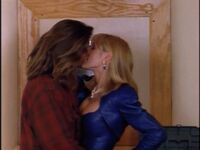 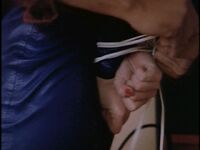 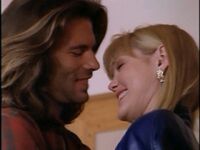 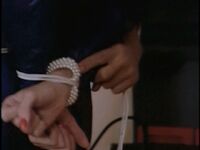 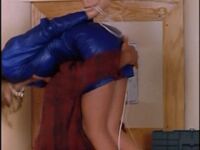 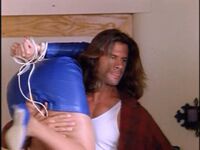 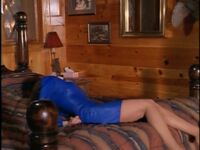 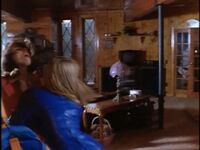 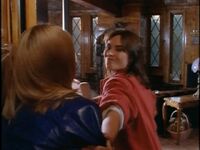 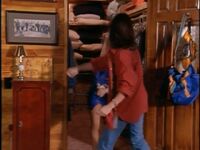 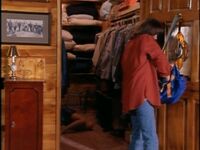 Add a photo to this gallery
Retrieved from "https://femalevillains.fandom.com/wiki/Stacy_Balfour_(Renegade)?oldid=209820"
Community content is available under CC-BY-SA unless otherwise noted.