Start a Wiki
watch 01:48
The Loop (TV)
Do you like this video?
Stacey Simms aka Riley (Taryn Manning) was the main villainess of the 2010 film Groupie. She was introduced as a fan of "cursed" rock band The Black Knights, becoming one of their groupies during their comeback tour and quickly bonding with the band's lead singer, Travis Bellamy.

Stacey's backstory, however, revealed that she already had history with The Black Knights: a year prior, she and her brother Donnie attended a Black Knights concert, during which a fire stunt Travis was performing led to a set of curtains being ignited. The fire caused a panic in which several concertgoers fled to escape, resulting in Donnie being trampled to death as Stacey attempted to call for help. The band's manager, Angus Wyles, was able to cover up the band's involvement in Donnie's death and helped them avoid facing charges, leaving Stacey vengeful against the band that she blamed for her brother's demise.

Seeking revenge against them, Stacey went to the band's comeback tour a year later under the name Riley, stabbing publicist Jackie to death with a knife due to her having helped Angus cover for the band in regards to Donnie's death. She then became a groupie for The Black Knights to join their tour, earning the ire of both Angus and Nikki, a fellow groupie and Travis' occasional lover. After a hazing ritual where Stacey was drugged and tied up by Nikki and the other groupies, Stacey confronted a drunk Nikki at a nearby pool and ordered her to stay out of her life before attacking and killing Nikki, striking her with a bottle before drowning her in the pool. Nikki's death was ruled an accident, with Stacey feigning guilt to cover her status as a murderous and vengeful villainess.

As the comeback tour continued, Angus attempted to convince Travis to eject "Riley" along with the rest of the groupies, only for Travis to keep her on after she revealed she could use her talent for making face masks for the cover of their next album. With that, Stacey continued her seduction of Travis, with Travis eventually talking to her about his guilt regarding the year-old tragedy, with Stacey subtly blasting Travis for not helping her brother and for making the brief insinuation that it was his fault for being at the concert in the first place. Stacey and Travis' relationship culminated in them having sex together, with Travis' wife Denise catching them in the act. As Travis went after Denise, Stacey was confronted by guitarist Davis Holmes, who accused Stacey of being responsible for all the mishaps on the tour and of trying to destroy the band. Stacey denied everything, and later accused Davis of trying to rape her when Travis came in and stopped Davis. But afterwards, Stacey angrily blasted Travis for wanting to leave the tour after the next performance, accusing Denise of lying about being pregnant with Travis' child and claiming Travis was abandoning her and the band.

Later on, as the Black Knights were beginning another performance, Stacey was approached by an old friend named Jenny, with Angus witnessing Jenny refer to Stacey by her real name and ask about her mother. Stacey adamantly argued she didn't know Jenny and threatened to harm her if she didn't leave her only, with Angus searching Stacey's name and finding out her connection to Donnie. It was then that Stacey entered the tour bus and confronted Angus, accusing him and the band of being selfish and of killing her brother. After realizing Stacey had killed Nikki to get her out of the way, Angus challenged Stacey to kill him for his direct role in covering up her brother's death, with the evil Stacey acqueiscing by stabbing him with a knife. The villainess then went about killing Davis by sabotaging the wiring of his guitar, leading him to be fatally electrocuted during the performance.

Following Davis' death, Travis planned to leave the tour, dismissing Stacey's attempts to keep him from leaving and attempt to schedule an appointment to have the face masks done. Frustrated at Travis' departure, Stacey went about killing Black Knights members Peter Whalen and Gerry Puck, using her modelling clay to suffocate Peter after tying him to his bed and doing the same to Gerry after drugging him with a syringe. After learning about the deaths of his band members via a news report, Travis (who had returned home and reconciled with Denise) recalled a mask Stacey had showed him that he briefly believed he recognized, finally realizing that the mask was of Donnie. As Travis realized Stacey's true identity, the villainess appeared in his bathroom and knocked out Denise as she was in the shower.

After waking up to find the masks of his deceased band members on the coffee table in front of him, Travis rushed to find Denise, finding her bound and gagged to a chair as Stacey held her at knifepoint. After making vicious threats to kill Denise and forcing Travis to tie himself up with duct tape, Stacey revealed herself as Donnie's sister and proclaimed that he should've been charged with murder, while also revealing that the masks she was making of Travis' bandmates were death masks and that getting revenge on the band was the only thing keeping her sane following her brother's death. Travis attempted to convince Stacey to let Denise go, only for the deranged villainess to argue that, while Denise was innocent in Donnie's death, she wanted Travis to have to watch someone he loved die like she had to. Before she could kill Denise, however, Travis broke free of his restraints and tackled Stacey, leading to a struggle as Stacey attempted to slash Travis with her knife. During the struggle, Denise was knocked over and managed to run upstairs, where she retrieved a gun and shot Stacey as she prepared to kill Travis. As the couple embraced each other, however, Stacey suddenly woke up and charged up the stairs towards them, only to shot again by Travis, this time killing the psychotic villainess. 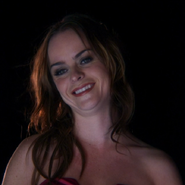 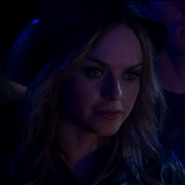 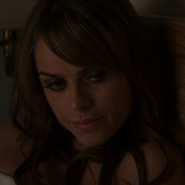 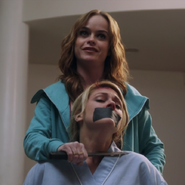 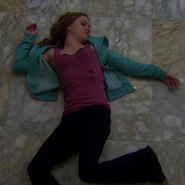 Stacey after being shot to death by Travis
Add a photo to this gallery
Retrieved from "https://femalevillains.fandom.com/wiki/Stacey_Simms_(Groupie)?oldid=163435"
Community content is available under CC-BY-SA unless otherwise noted.