Start a Wiki
watch 14:21
The Loop (TV)
Do you like this video?
The Spider Lady (Carol Forman) is the villainess in the 1948 serial "Superman".  This was a 15-part black and white Columbia film serial based on Superman.

The Spider Lady is the queen of the Metropolis underworld.  The rest of the criminals in the city report and work for her.  The Spider Lady plans to find a way to defeat Superman (Kirk Alyn).

A meteor comes to Earth, and it falls into the hands of Dr. Leeds, a scientist and astronomer, who examines it and classifies it as a piece of the destroyed planet Krypton.  Clark Kent meets with Dr. Leeds who shows him the meteor.  The meteor is a glowing rock which immediately causes Kent to collapse.  Clark reveals that he is Superman and asks Leeds' help to destroy the rock.  Leeds agrees to discard it after two days of scientific study.

Leeds' assistant Morgan overhears this, and reports to The Spider Lady, expecting to be paid for the information.  Lois Lane (Noel Neill) thinks he is being abducted, and is kidnapped and taken to The Spider Lady.  The Spider Lady after hearing the information from Morgan, pays him one dollar.  The man is insulted, so she has him killed by electrocution on her spider's web.  She then orders Lois killed in the same manner.  At the last second, Spider Lady spares Lois' life.

The Spider Lady now knows about kryptonite, and publically challenges Superman to stop her from robbing the Metropolis Museum.  While the police and Superman are distracted by a staged car accident, the Spider Lady's men steal the kryptonite from Leed's office.  Lois meets the Spider Lady's henchmen, who are impersonating the Reducer Ray's inventor and his assistant.  Lois tries to call for help but is seized by them.  She is tied to a chair, gagged, and left in a room with a machine that seems about to blow up.  Superman saves Lois and prevents the Reducer Ray from exploding.

The Spider Lady then has the scientist named Dr. Hackett help her use the kryptonite and Reducer Ray.  Clark finds out where the doctor is being held, ties him up, and disguises himself as the doctor.  The crooks discover Clark and stun him, leaving him on a rural road.  Superman finds Hackett's cabin that he was being held at empty.

The Spider Lady then plans to capture Clark Kent to trap Superman.  They try to call Kent with a tip, but Lois answers instead.  She and Jimmy go to the meeting place, and Jimmy is kidnapped.  Clark receives a call about Jimmy, and goes to meet the crooks, secretly followed by Lois.  Clark offers to have Superman show up if Jimmy is freed.  Instead the crooks have Clark locked up in a room in a warehouse, while Jimmy is left unconscious on a conveyor belt headed into a blast furnace.

Superman rescues Jimmy, but the crooks escape when they toss a piece of the kryptonite at Superman.

The Spider Lady then disguises herself as Lois Lane and picks up Dr. Graham at the airport.  When Lois gets to the airport, she picks up Hacket disguised as Dr. Graham.  While Graham is being taken to the Spider Lady's cave hideout, Lois takes Hackett and an assistant to the reducer ray at Metropolis University.  Lois is captured and the ray is rigged to explode.  Superman arrives in time to save the ray machine and Lois.

The Spider Lady has Dr. Graham begin working on another Reducer Ray, but this time in a lead lined room, so that Superman's x-ray vision cannot detect him.  Dr. Graham requires a new chemical compound called mono-chromite.  The Spider Lady's men go to retrieve it from a chemical engineer named Fred Larkin.  When Larkin finds that it is a restricted compound, he calls Clark Kent to investigate.  However, Lois arranges for Clark to end up arrested so she can take the lead.  Kent ends up breaking out of jail and once again saves Jimmy and Lois who have been abducted.

The crooks decide to go to a mining site and steal the compound. As the crooks are carrying out ore, Clark is captured and left hancuffed to Lois.  They then rig an explosion in the mine and knockout Jimmy.  The explosion stuns Lois long enough for Superman to get them outside.

The Spider Lady announces publicly that she will destroy the Daily Planet building.  Lois and Jimmy are captured once again and taken to the Spider Lady's cave hideout.  Meanwhile Clark figures out where the hidout is located.  Superman goes and finds one of Spider Lady's men who uses kryptonite.  Superman is dragged into Spider Lady's hidout where she holds another piece of kryptonite to prevent him from stopping the ray machine.  However, Superman was wearing a lead-lined costume and faking being unconscious.  He resists the ray's beam and Dr. Graham turns it on the fleeing Spider Lady killing her. 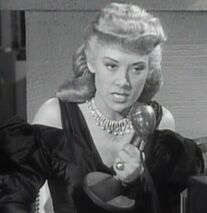 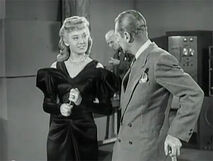 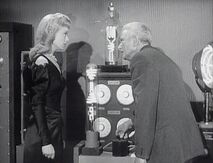 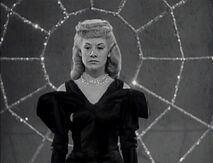 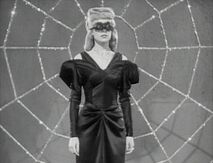 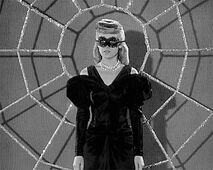 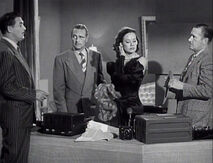 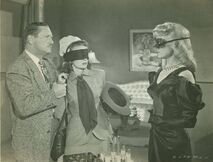 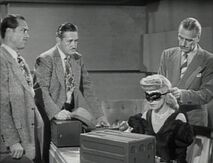 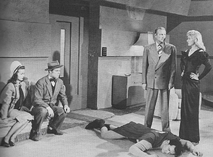 Add a photo to this gallery
Retrieved from "https://femalevillains.fandom.com/wiki/Spider_Lady_(Superman)?oldid=192005"
Community content is available under CC-BY-SA unless otherwise noted.