Start a Wiki
watch 01:50
The Loop (TV)
Do you like this video?
The Spider-Villain (Maggie Roswell) is a villainess from "Super Buttons," a Mindy and Buttons segment from episode 1.61 of Animaniacs (airdate May 2, 1994).

The segment has Mindy and her dog, Buttons, as superheroes, with Buttons attempting to protect Mindy from harm while the young girl chases a baby bird. The female Spider-Villain appears later in the segment, while the city's mayor gives a speech stating that he had seen no evidence of carnivorous spider people, with the villainess cackling at the mayor's claim. Buttons ended up captured by the villainess while saving the mayor and Mindy, and narrowly escapes being eaten by her. He later returned with a can of bug spray, and held the Spider-Villain at bay. In response, however, the villainess returned with a fly swatter and smacked Buttons twice before walking off. 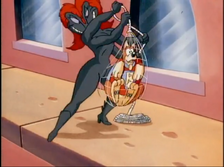 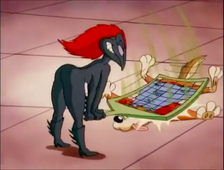 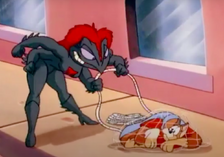 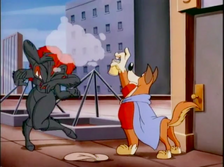 Add a photo to this gallery
Retrieved from "https://femalevillains.fandom.com/wiki/Spider-Villain_(Animaniacs)?oldid=200040"
Community content is available under CC-BY-SA unless otherwise noted.