Sonya (Hana Mae Lee) is a villainess in Netflix’s 2017 horror-comedy The Babysitter. She was a member of a Satanic cult along with her other friends: Bee (the cult's leader), Allison, Max, and John. She has a cool, eerily calm, collected, observant, morose, solemn, quiet, reserved, calculating, tease-happy, strange, unstable, and very intellectual personality.

During the film's events, Bee invited her villainous friends to the home of Cole Johnson (the film's protagonist) to perform a Satanic ritual, killing Samuel (who they also invited to the "party") as a sacrifice. Cole witnessed the murder and attempted to flee after the group also took a blood sample from him, but passed out from blood loss.

When Cole woke up, he found that the cult members had tied him up and were trying to convince him what they were doing was for a science project. But when the police arrived, having been called by Cole before he fainted, the cult members fought off and killed them before forcing Cole to give up the code to dissuade further police presence. Later on, after killing John, Cole killed Sonya as she was attempting to kill him, using a flammable bug spray to ignite a firework rocket, causing two separate explosions that ultimately killed her. 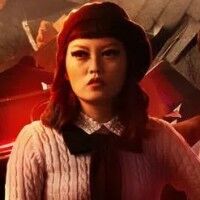 Add a photo to this gallery
Retrieved from "https://femalevillains.fandom.com/wiki/Sonya_(The_Babysitter)?oldid=191087"
Community content is available under CC-BY-SA unless otherwise noted.
FandomShop Newsletter Join Fan Lab