In the film, the Snow Queen is considered a mythical character by the children. But in fact she really exists and lives at a palace in the North Pole.

The Snow Queen has three trolls named Eric, Baggy, and Wardrobe. Her plan is to set up her magic mirror (which was her most valuable possession) up on a mountain to freeze the entire world in an endless winter in order to rule it, but the trolls mess up causing the mirror to fall onto their flying machine's propeller and break, shattering it into pieces. Two of the pieces hits Tom in the eye and heart, turning him evil.

The Snow Queen sends her bats to retrieve the pieces. Realizing that the last two were inside Tom, the Snow Queen captures him and took him to her palace, where he begins to rebuild her mirror. When the trolls warn him that the Snow Queen is going to kill him to get the last two pieces, she kisses him, turning his veins to ice, which would kill him when it reaches his heart.

However, Ellie, Peeps the bird, Dimly the reindeer, and Freda arrive at the Snow Queen's palace and the trolls decide to help them. Freda makes a potion to dissolve the mirror, but before Tom could drink it, the Snow Queen blasts it away with her staff causing it to be impaled on an icicle. After a fierce fight, the vial of potion is hit and fell onto the mirror, destroying it and freezing the Snow Queen in her carriage before she can flee. However, according to Freda, she will not stay frozen forever and will return. 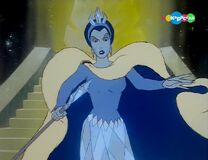 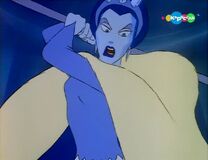 She does return, and sooner than expected. In The Snow Queen's Revenge, her bats take her staff and place it in her hand, unfreezing her. The Snow Queen confronts her trolls, who seems to go back over to her side (with much reluctance from Baggy and Wardrobe) and tells her that Ellie escaped. The Snow Queen kidnaps Dimly (who just returned to take the trolls somewhere to live) to lure Ellie to her palace and get her revenge.

As it was getting to warm in the North Pole, the Snow Queen leaves for her other palace in the South Pole, at an edge of a frozen volcano. There, two more of her minions are seen; two penguins, Pearl and Elspeth. While waiting for Ellie to come to her, the Snow Queen begins construction on an ice pterodactyl called an Iceosaurus, which can freeze anything with its eyes.

Ellie arrives at the palace and rescues Dimly from his cell, but he is unable to fly away from the palace. The Snow Queen and the Iceosaurus attack Ellie, Peeps, and Dimly, but Ellie uses Freda's magic device as a shield to deflect the Snow Queen's attacks, which hits the Iceosaurus and causes it to fall to its death. This in turn causes a volcanic eruption that begins destroy the Snow Queen's palace. She attempts to run away in terror, but is unable to escape her crumbling palace and falls into a lake of lava below.

Her body is shown intact afterward, but trapped drifting in a river of molten lava. She has been turned to stone (perhaps by herself for protection) and is still holding with her staff which is now also stone. Before the credits roll, her eyes are shown glowing blue (as they did at the end of the first film, after she was frozen), showing that she did survive and is still alive.

Retrieved from "https://femalevillains.fandom.com/wiki/Snow_Queen_(The_Snow_Queen_1995)?oldid=206316"
Community content is available under CC-BY-SA unless otherwise noted.