Shirley (Patti Gilbert) is the evil Queen in the 1967 episode “The Unkindest Tut of All” for the TV series Batman.

King Tut (Victor Buono) returns to Gotham, supposedly reformed and sets up a tent on 6th and Albert streets as a public crime predictor. After three crimes Tut predicts become reality, Batman (Adam West) and Robin (Richard Grayson) pay him a visit.  Tut is performing a ritual involving calling the evil gods to make his next prediction.  We see the lovely Shirley, who is his current Queen fanning him with a large red ostrich feather as he stands on his throne. After leaving, Tut reveals that if he predicts enough crimes that come true, the police will trust him, and then he’ll pull a nasty one.

Shirley is dressed in a gold bikini top and long skirt, has an Egyptian bob hairdo and headdress. Shirley has a abnormally high squeaky voice.

Later Tut has his cronies rob the soccer stadium and deliberately let the Caped Crusader apprehend them. This delays him long enough for Tut to plant a homing device in the Batmobile. They discover that the Batcave is under Wayne Manor. Tut calls the house and demands to speak to Batman, not Bruce Wayne. Bruce denies Tut’s accusing him of being Batman, so Tut demands that he appear in public together.

Later Batman programs the Batmobile to drive by itself and employs the use of a dummy Batman and with the art of ventriloquism is able to talk on screen. Tut is devastated, but then predicts a raid to free Gotham City’s archcriminals, which lures the Police to the prison. Meanwhile, Tut snatches priceless Egyptian scrolls which will eventually lead him to the statue of gold, rumoured to give its possessor power to control the world.

Becoming aware of the danger of the scrolls, Barbara Gordon (Yvonne Craig) changes to Batgirl and speeds by Batgirlcycle to the Gotham City Library. She is too late, and she tracks the monarch to his hideout. After she takes out two of Tut’s henchmen, Shirley uses a vase to knock Batgirl out from behind. The Dynamic Duo follows Batgirl’s trail at the library to Tut’s hideout. They rescue Batgirl, and promptly thrash Tut and his Tut-lings.

In the next scene we see King Tug and Shirley in Commissioner Gordon’s office along with Batman, Robin, and Barbara. As they talk about their sentencing, Commissioner Gordon receives a call that says Louie the Lilac was just spotted in town. 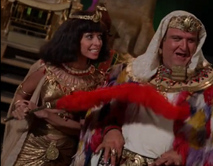 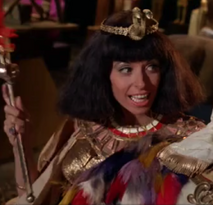 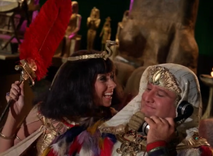 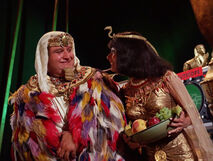 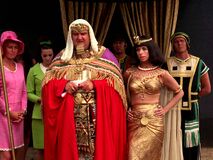 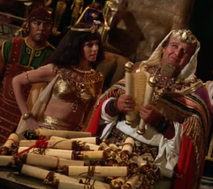 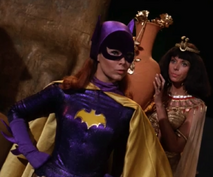 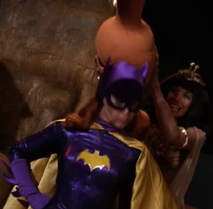 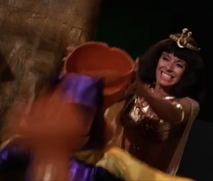 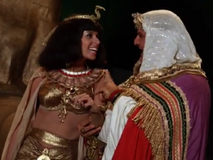 Add a photo to this gallery
Retrieved from "https://femalevillains.fandom.com/wiki/Shirley_(Batman)?oldid=116917"
Community content is available under CC-BY-SA unless otherwise noted.