The She-Devil Of The Coliseum (コロシアムの女悪魔) is the boss of the 5th stage of the arcade game Metamorphic Force (メタモルフィックフォース).

She is a scantily clad, pink skinned devil woman who the player fights in a coliseum.

When the player enters the coliseum she suddenly appears and states that she will enjoy defeating them, then the fight begins.

Her methods of attack are mostly punching and kicking, but she also loves to try and crush the heroes under her ass with two other moves. One where she leaps up and tries to land on the heroes with her ass, and another where she rams her ass into the heroes face and then lands on top of them and sits on them.

She also lets out an evil laugh every time she hurts or kills the heroes.

When she is defeated she raises her arm to the sky and cries out "My Lord!" to the game's final boss, before collapsing and dying.

Obviously as a video game boss whether she successfully kills or not is dependent on the player, but she has a few different ways of doing so with her body.

Punching the hero in the face 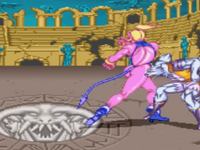 A devastating right hook to the hero's face

Kicking the hero in the face 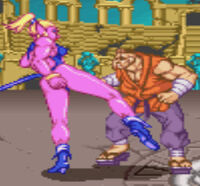 Unleashing another deadly kick to the hero 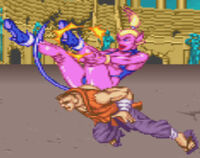 Trying to crush the hero under her ass 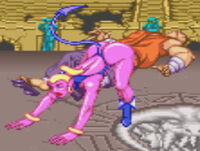 Ramming her ass into the hero 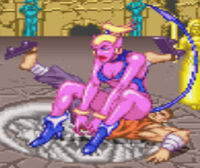 Sitting on the fallen hero

Laughing at the sight of the fallen hero at her feet 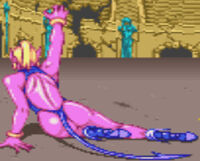 Landing on the hero with her ass

Fanart of the She-Devil Of The Coliseum (by WATANABEKENPO)
Add a photo to this gallery
Retrieved from "https://femalevillains.fandom.com/wiki/She-Devil_Of_The_Coliseum_(Metamorphic_Force)?oldid=164162"
Community content is available under CC-BY-SA unless otherwise noted.