Start a Wiki
watch 04:10
The Loop (TV)
Do you like this video?
The She-Demon (Nicky Mealings) was the half-female and half-serpent creature in the 1995 episode "The Wrong Path" for the TV series, "Hercules: The Legendary Journeys".

The She-Demon was one of the children of Echidna (Bridget Hoffman) and Typhon (Glenn Shadix). She possessed the upper body of a human female, while her lower body was that of a serpent.  In order to maintain her disguise and lure men into her trap, she often wore a long dress to conceal her lower half and thus hide her true nature.  Her serpent-like body granted her enhanced agility and maneuverability, allowing her to cover ground very quickly, and her tail was partially prehensile, allowing her to lash out with it like a weapon.  Typhon had once told Hercules (Kevin Sorbo) that the She-Demon had a beautiful voice and was a singer.

The She-Demon had the power of petrification, and could turn others to stone by striking them with the tip of her tail.  She turned Iolaus (Michael Hurst) to stone in one sequence.  She was not immune to her own power, and was defeated by Hercules when he tricked her into striking herself with her own tail.  All of her victims including Iolaus, were restored when Hercules killed the She-Demon.

When Iolaus' grandmother, Leandra (Sarah Smuts-Kennedy), reappeared after being missing for 50 years in Syllabus, she told him to beware the She-Demon (HTLJ "Love Takes a Holiday"), suggesting that she was over 50 by the time Hercules defeated her. 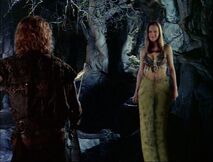 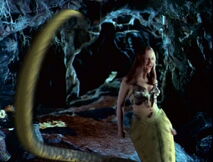 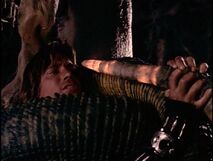 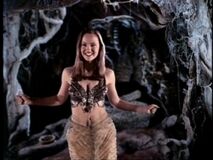 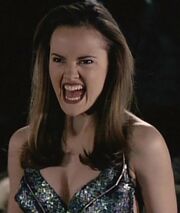 Add a photo to this gallery
Retrieved from "https://femalevillains.fandom.com/wiki/She-Demon_(Hercules:_The_Legendary_Journeys)?oldid=115023"
Community content is available under CC-BY-SA unless otherwise noted.