Sharon Miller (Johannah Newmarch) is the hidden main villainess of the 2017 film Pretty Little Dead Girl (alternately titled, Her Secret Killer and Heart of Murder). She is the wife of Garrett Miller and the mother of their only daughter, Emma.

Sharon's backstory revealed that sometime before the film's events, she and Garrett received the bad news that Emma would need a heart transplant. While sitting on a bench distraught over the bad news about her daughter, Sharon was encountered by her niece, Constance Jones, who was fretting over bad decisions she had made, including an affair with married Peter Harken. Their conversation took place in Constance's car, with Sharon appearing as a shoulder for her niece to cry on.

However, Sharon turned heel and drugged her niece, as she was planning to kill Constance and take her heart, due to Constance being a familial match for Emma. After Constance was knocked out, the evil Sharon turned on the car engine and allowed the carbon monoxide to kill her, and later phoned 911 with claims that her niece committed suicide.

Emma received her transplant in the beginning of the film, with Sharon keeping her villainous actions a secret from not only Emma, but Garrett as well. Emma had figured out that Constance was her donor, and later went to the home her aunt (Constance's mother), who accused Sharon of lying about her to steal Constance from her. Even after Emma knew about Constance, Sharon continued to tell her daughter that Constance committed suicide, though Emma had eventually figured out that her cousin was murdered.

The film's climax had Emma going after Harken, who she believed killed Constance to keep her quiet. Constance's friend, Seth (under Emma's orders), instructed Emma's parents to call police and send them to Emma and Harken's whereabouts (a nearby hotel), and it was after this that Sharon picked up a gun--much to Garrett's bewilderment--and headed to the hotel on her own. Sharon entered and pointed a gun at Harken, and ordered Emma to leave, as she planned on killing Harken as part of her attempt to paint him as her niece's killer. After Sharon fired a shot, police--led by Detective Roberts--arrived at the scene, and it was there that Roberts arrested the villainess for not only the attempt to kill Harken, but for Constance's murder, as Roberts played the 911 call and saw Sharon at the scene via a security camera.

Emma was shocked over her mother being arrested for killing Constance, and while she was handcuffed, Sharon made a direct confession, telling Emma that she would kill for her. Sharon's confession continued following her arrest; stating that even before she knew what a mess that Constance made out of her life, she knew what she had to do, while claiming that she didn't have a choice. 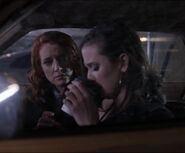 Sharon beginning the process of killing her niece, Constance Jones 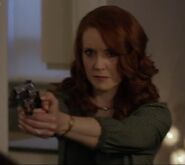 Sharon arrested for her actions
Add a photo to this gallery
Retrieved from "https://femalevillains.fandom.com/wiki/Sharon_Miller_(Pretty_Little_Dead_Girl)?oldid=170120"
Community content is available under CC-BY-SA unless otherwise noted.