Shannon Dennings (Amy Sloan) is the plot-twist final villainess of the 2005 Lifetime film Crimes of Passion (airdate February 28, 2005). She is an aspiring photographer and the wife of businessman Jerry Dennings, with their marriage becoming difficult due to a combination of Jerry's psychological issues, workaholic tendencies, and also an affair that he had with a coworker in the past.

The movie opened with Jerry finding himself on the receiving end of a false sexual assault accusation from Rebecca Walker, who was in competition with him for a VP position. Upon learning about the accusation, Shannon found herself unsure of whether or not to believe Jerry's pleas of innocence and ultimately decided that they needed time apart, asking Jerry to find somewhere else to stay while she went on a work trip.

Unbeknownst to Shannon, however, Jerry and Rebecca were lovers and had colluded to file the false accusation as a ploy to get a substantial settlement—which was worth $10,000,000—from their company. After receiving the settlement, Jerry began spending more time with Rebecca, while also sending Shannon a message announcing he wanted a divorce. Shannon was initially outraged at Jerry for his callous way of announcing his plans to divorce her, but she was also appeased by Jerry giving her a generous divorce settlement, later telling him that she realized she needed to be away from him in order to find herself. However, Jerry took note of Shannon's telephoto camera lenses, which led him to believe that she was the blackmailer who had sent him the pictures he received of himself and Rebecca having sex.

As Jerry and Rebecca's plan began to fall apart after they were forced to "kill" investigator Frank Schaffer (their true blackmailer), Jerry snapped at Shannon when she confronted him about not sending her the check he'd promised her, accusing her of being self-centered and not being able to notice people's emotions, while also arguing that she hadn't done anything to earn the money she was asking him for. At the film's climax, Shannon appeared at her and Jerry's cliffside cabin as he was being attacked by Rebecca and Schaffer, as the two had conspired to fake Schaffer's murder using the corpse of Jerry's colleague/friend Donald Fuller in an attempt to make off with Jerry and Rebecca's ill-gotten money. After Jerry shoved Schaffer to his real death, Rebecca attempted to kill Jerry as he hung off the cabin patio's ledge, only to be stopped when Shannon shot her dead from behind.

Jerry expressed relief at Shannon's arrival and begged her to pull him to safety as she approached the ledge. However, in the film's final plot twist, Shannon turned heel by allowing Jerry to fall to his death offscreen, having become vengeful upon seeing that her divorce settlement with him wouldn't provide her with the amount of money she'd expected. The film's conclusion had Shannon speaking with the police, deceptively claiming that she had no knowledge of Rebecca's involvement with Jerry or why she and Schaffer were at their cabin. After leaving the station, however, Shannon opened the trunk of her vehicle to reveal a bag containing the money Jerry had gotten out of his bank's safe deposit box, revealing that the villainess had let the latter die in order to make off with his money (with the police believing Shannon's claim that she was unable to pull her villainous husband to safety). The film ended with the evil Shannon smirking as she closed the trunk, obviously pleased with having successfully gotten away with her self-serving crimes. 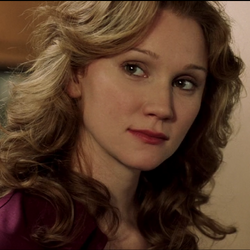 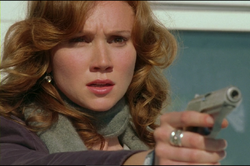 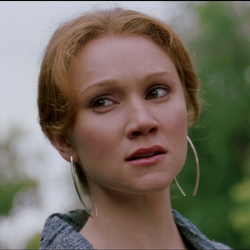 Shannon during her villainous reveal 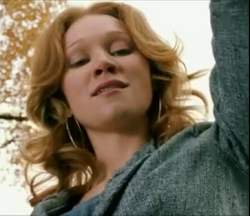 Shannon's evil smirk at the end of the film
Add a photo to this gallery
Retrieved from "https://femalevillains.fandom.com/wiki/Shannon_Dennings_(Crimes_of_Passion)?oldid=174837"
Community content is available under CC-BY-SA unless otherwise noted.