Start a Wiki
watch 01:48
The Loop (TV)
Do you like this video?
Shandray (Sarah Douglas) is one of the main antagonists in the 1986 post-apocalyptic sci-fi film "Solarbabies". She is a scientist who works at the Aquabunker; a facility of the Protectorate, which controls all of Earth's water supply.

Early in the film, a mysterious alien life force called Bodhai is discovered by a young boy named Daniel (Luke Haas). The child and his friends (a small group known as the "Solarbabies") live at a grueling and oppressive orphanage under the authority of a man named Grock (Richard Jordan). Upon learning of the Bodhai, Grock attempts to seize it, knowing that it has come to free the waters of Earth once more

Grock seeks the help of Shandray in order to destroy the alien orb. Wanting to take credit for having accomplished such a feat, she agrees and has her robotic creation, Terminack - who, as she puts it "can squeeze the color from a ruby, deathly pluck the eye from a living bird, and has been programmed to enjoy what he does" - to kill Bohdai. However, the Solarbabies intervene, and both Shandray and Grock are ultimately killed, allowing the alien to carry out it's intended mission.

Shandray's demise happens when Daniel and Shandray fight over the mysterious orb.  Shandray's hands begin to burn from the orb, and she backs up into a computer terminal and is electrocuted to death. 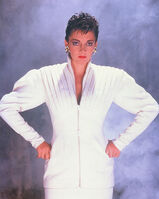 With the film's other lead villain, Grock.

Bring in her sadistic robot, Terminackl, to torture the alien.

Attempting to steal the Bohdai from Daniel...

...but the orb is none too keen on being touched by the villainess...

...and she is electrocuted.
Add a photo to this gallery
Retrieved from "https://femalevillains.fandom.com/wiki/Shandray_(Solarbabies)?oldid=99695"
Community content is available under CC-BY-SA unless otherwise noted.