The Shadowbolts are the students of Principal Cinch in My Little Pony: Equestria Girls: Friendship Games and serve as major villains. They are the rich, bratty and spoiled rival team to the Wondercolts and they want to win the games and leave the Wondercolts in the dust. They are willing to do anything to get their way and are a lot more dangerous than they look. They also try to bully Twilight Sparkle into releasing her magic powers from her pendant necklace, which she doesn't want to do.

NOTE: These girls are merly background characters who never actually do anything, but are just on their side. 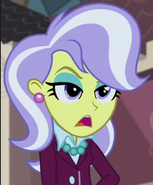 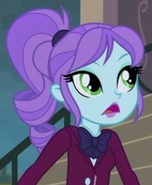 Gleaming Glory
Add a photo to this gallery

Add a photo to this gallery
Retrieved from "https://femalevillains.fandom.com/wiki/Shadowbolts_(My_Little_Pony:_Equestria_Girls_-_Friendship_Games)?oldid=167543"
Community content is available under CC-BY-SA unless otherwise noted.