The Female Villains Wiki
Register
Don't have an account?
Sign In
Advertisement
in: 2010s, Beauty Pageant, Bloodsport,
and 21 more

A former Miss Universe who was stripped of her crown after having sexual relations with all five judges, Jones moves on to become a weather girl, and then news reporter for Weyland Broadcasting. One day, she films a prison riot that breaks out at Terminal Island. When later brought to Mr. Weyland, who coincidentally is also the owner of the penitentiary, due to the public relations nightmare that her footage caused, she brings up the sensational ratings that it received upon broadcast. She goes on to say that people are tired of fake violence, and strikes a deal with the man to have prisoners fight to the death in a makeshift arena as a television program called "Death Match". Herself the executive producer, Jones secretly meddles with the game by denying prisoners to access to certain weapons via a control panel, in order to manipulate the the excitement of the spectacle.

Outraged at the rule that a prisoner can "submit" and evade death, it is not long at all before Jones begins searching for another fatal game that is more reliably a ratings booster. When the film's hero, Carl Lucas, is brought to the prison for a botched bank job, for which he was just the getaway driver but tragically wound up killing a police officer regardless, Jones catches a glimpse of his unsanctioned driving skills on the premises, which inspires her to form "Death Race".

Warden Parks implores her not to use Lucas in the game, as it will allow the man's former employer-turned-enemy to know exactly where he his and send his thugs to kill him, but Jones could not be less sympathetic. Jones first tries to persuade Lucas to participate with the promise of his own cell, real food and (implied) sexual favors, courtesy of herself. She wears a plunging dress and works her fingers down Lucas' chest. They begin kissing wetly and a pleased September is surprised when Lucas to forcefully distances himself and rejects her by saying, "Go sell sleazy somewhere else," revealing that he had been feigning his attraction to her.  Visibly surprised and hurt, she arranges it so that the passive and weak Lists, a recently acquainted friend of the hero, is to be killed in "Death Match". Wishing to save his friend, Lucas complies.

The weak ratings on the show cause September's employer Wey to stage a meeting. He threatens to cut the funding if she cannot deliver the ratings. September confidently takes a high heeled step to Wey and asks him, "Are you sure?" Wey gazes up and down September's figure, taking notice of her revealing shirt. He places his right hand on her hair and September grins, expecting a kiss from her employer. Suddenly, Wey balls her long silky hair forcefully and tugs at it backward, causing September's mouth to transform from a grin to open mouthed shock and discomfort. Wey asserts, "Make my money bitch" before walking away, leaving her arrogant demeanor shaken.

Lucas manages to perform well in several races, but one of them leads to him being greatly disfigured. Jones demands that he keep racing however, threatening to have his girlfriend Katrina gang-raped if he doesn't. At the start of the next race, Jones kicks things off the announcement at the ground level as per usual. This time, however, Lucas quickly spins his car around and drives straight into Jones and kills her.

Making her pitch to Mr. Weyland...

Filming the brutality at the beginning of the story...

"And here I thought we were here to protect society and punish criminals," laments Warden Parks.

"Then you're dumber than I thought," retorts September.

Wringing her hands with excitement at the start of the next "Death Match"... 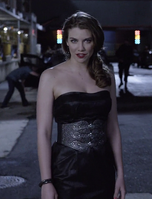 The last race of the film for Lucas...

...and the last, period, for September.