Start a Wiki
watch 01:38
The Loop (TV)
Do you like this video?
Selena (Anjali Jay) is a recurring villainess from Season Three of The CW's Supergirl series. She serves as one of the members of the High Council of Argo, alongside Alura Zor-El, the birth mother of Kara Zor-El/Kara Danvers.

Selena originally appeared throughout the season as the villainous Dark Kryptonian, beginning with the season's fourth episode, "The Faithful," doing so as a hallucination of Samantha Arias. As the season progressed, the Dark Kryptonian revealed Samantha's identity as Reign, a Kryptonian "Worldkiller" sent to earth to "execute justice" using excessive violence, causing Earth to burn; after the villainess activated Sam's evil alter-ego, Reign.

Selena was officially introduced by name and by her position in episode 3.20, "Dark Side of the Moon," which saw Kara and Mon-El heading to Argo City to acquire a black rock known as Harun-El, that could be used to stop Reign. It was there that Kara was surprised by seeing her mother, Alura Zor-El, who was believed to have perished when Krypton fell, only to find save haven in Argo City. Kara and Mon-El met Selena and the rest of the council, with Selena expressing reluctance to give Kara what she was looking for. It was put to a vote, and Selena, with the deciding vote, approved and allowed Kara to take the Harun-El, which Selena directly gave her while attending her departure back to Earth in her ship.

Later in the episode, however, Selena turned heel and put on her black cloak as she later summoned Reign, with the scene officially revealing Selena as the villainess known as the Dark Kryptonian. Following her reveal, the evil Selena performed her ritual to allow Reign to break out of Lena Luthor's built prison. Entering the season's penultimate episode, "Make it Reign," Kara, Alura, and Mon-El had figured out Selena's true villainous actions, and it was early in the episode that a hologram of Selena appeared to the group and lashed out at Alura for (in her mind) causing Krypton's fall, before trapping them inside the cave and working on her plan to resurrect Reign.

However, their ritual failed due to the deaths of Purity and Pestilence, leading to Selena and the rest of the Dark Kryptonians to invade DEO headquarters in to acquire the fallen Worldkillers' blood. After a battle, Selena realized that Demos had possession of the blood and killed him, but not before he tossed the vials to Kara, who destroyed them. However, Selena used her own blood to successfully resurrect Reign, and later killed their human ally. 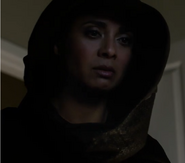 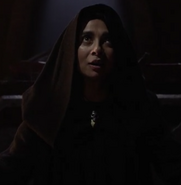 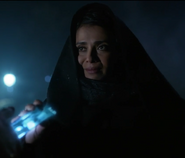 Add a photo to this gallery
Retrieved from "https://femalevillains.fandom.com/wiki/Selena_(Supergirl_TV_Series)?oldid=182987"
Community content is available under CC-BY-SA unless otherwise noted.