She appears in the lab working for Basils rival and the shows regular antagonist, Cousin Mortimer. She and another scientist are conducting experiments on one of the main characters called Stephen. Their plans are quickly cut short when Basil comes to the rescue with a stack of buckets and throws them onto the heads of each of the villains and then the protagonists make their escape whilst the bad guys are seen hobbling around with their heads stuck inside a bucket.

Trivia:  Charlotte Hudson also presented TV series 'Brainiac'. Although she was as herself, Charlotte was also in character portraying a Villainess role where she would morbidly set up the brainiac human guinea pigs to conduct experiments in what seemingly could be dangerous or fatal,only reward them with blunt and sarcastic comments as she views them to be inferior and expendible. 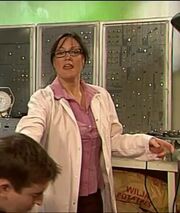 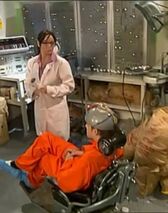 Add a photo to this gallery
Retrieved from "https://femalevillains.fandom.com/wiki/Scientist_(The_Basil_Brush_Show)?oldid=202643"
Community content is available under CC-BY-SA unless otherwise noted.