Scarlet Overkill is the main villain of the film "Minions", which was the 2015 prequel to the Despicable Me films.  She is voiced by Sandra Bullock in the English version.

Scarlet is a manipulative and ambitious villain determined to dominate the world and become the first female supervillain. She is the wife of Herb Overkill.  Scarlet has black hair, and green eyes. She wears a red strapless dress, a black choker necklace, black opera gloves, black stockings, and black high heels.  She has no powers, however, her dress can turn into a giant rocket, giving her the ability to fly. Her rocket dress also has access to weapons.

Scarlet attends the 1968's Villian Con as a giant shadow behind a wall.  The public speaker was in search of new henchmen, and set up a challenge of whoever steals her ruby gets the job.

Later she took Kevin, Stuart and Bob to her castle in England.  She introduced them to her husband Herb and her stolen loot.  She told them about her plan stealing the British crown to overthrow Queen Elizabeth and become the new Queen of England.

In the news it was told that Bob stole Arthur Pendragon's sword in the stone and was crowned King.  This allowed the Minions to get ahold of the crown.  However, feeling betrayed, Scarlet traveled to Buckingham Palace to kill Bob and the Minions.  To appease Scarlet, Bob abdicated the crown for her.  Nevertheless, Scarlet sent them to an underground dungeon to be tortured, telling them that she hates them for stealing her turf.

During the coronation ceremony, Kevin, Stuart and Bob try to apologize, but accidentally finish collapsing a chandelier over her, almost killing her. Scarlet survives and orders them to be executed. Kevin manages to escape, but Stuart and Bob end up captured. She sends a message to Kevin through the news threatening to kill both Stuart and Bob if he does not come by dawn. Finally seeing that Scarlet is not the type of master that the Minions want to follow, Kevin decides to take action to rescue his friends and defeat Scarlet for good.

The next morning, Scarlet and Herb settle a large amount of explosives in order to murder Stuart and Bob.  They take Bob's teddy bear as a memento.  Fortunately, a giant Kevin arrives to the rescue by using a hydrant to stop the explosions.  Scarlet attempts to flee along with Herb, but they are stopped by Kevin.  They both shield themselves by hiding in Kevin's mouth. However, Kevin manages to escape the explosion and shrinks back to his normal size while retrieving Bob's teddy bear.

Scarlet and Herb survive the explosion and reappear alive during Kevin's knighting ceremony. They attempt to escape, but they end up being frozen by a young Felorious Gru, who takes away the crown from her hands. Spotting Gru, Kevin sees that he has found a new potential master, so he and the other Minions follow Gru. Scarlet is now upset that she is done for, but Bob gives Scarlet the little crown originally gifted by Queen Elizabeth to his teddy bear out of pity before leaving. It is unknown what happens to Scarlet and Herb afterwards, though it is possible that they were arrested and sent to jail for their crimes.

Scarlet and Herb appear along with the other villains in the after-credits scene, dancing and singing with the rest of the characters. However, they are scared off by an arriving Tyrannosaurus. 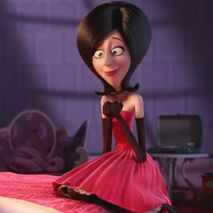 Add a photo to this gallery
Retrieved from "https://femalevillains.fandom.com/wiki/Scarlet_Overkill_(Minions)?oldid=196089"
Community content is available under CC-BY-SA unless otherwise noted.