Start a Wiki
watch 01:48
The Loop (TV)
Do you like this video?
Saturn is a villainess from the cartoon Mighty Man And Yukk, she appears in the 1979 episode Public Rooster #1. Mighty Man And Yukk is a segmented show from the animated series The Plastic Man Comedy Adventure Show.

She is a minion of The Rooster, a low level criminal, who is trying to make a name for himself by causing chaos throughout the city. He uses an anti-gravity machine to raise landmarks from their rightful positions and also tries to send a train, with the governor on board, to the moon. Saturn dresses in a furry white outfit with a short skirt and white boots. She also has a rooster hat on her head.

She doesn’t really see much action, she just stays by The Rooster’s side and shows an eagerness for his evil plans to succeed. Saturn and The Rooster are eventually captured when Yukk stops their van from getting away with a wooden blockade. Later on in the episode it is mentioned that The Rooster has been sent to jail, however Saturn’s fate isn’t shown or mentioned, but it can be presumed she shared a similar fate. 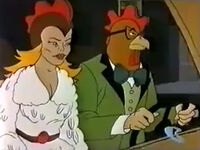 Saturn and The Rooster 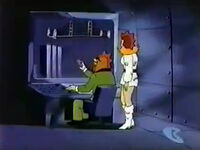 Saturn watches as The Rooster lifts a bridge with his device... 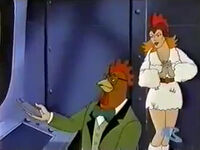 ...and she seems to love it 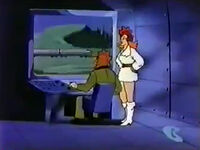 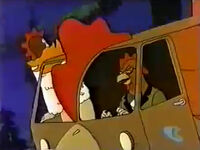 Saturn spots the heroes chasing the villains in their van... 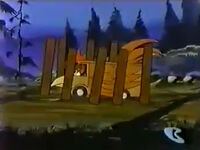 ...but they can't get away from them and are caught
Add a photo to this gallery
Retrieved from "https://femalevillains.fandom.com/wiki/Saturn_(Mighty_Man_And_Yukk)?oldid=191673"
Community content is available under CC-BY-SA unless otherwise noted.