Sari Clayton is a world famous photographer whose photos are printed in all the magazines of the world. But in reality this is only a cover up and she is a spy working for an international spy ring. She was exposed by Margo Manning, the owner of a male model agency. In which the captain of the army intelligence Ted Hale came under cover. He began dating Sari and Margo thought that Ted was cheating to her. She went to the office with Sari and accidentally heard the sound of a radio transmitter. Then she decided to secretly get into her office and saw that the photos of Sari contained a secret code. Here she saw Ted, who told her that he was an army captain and he was investigating Sari's secret activities. At that moment, Sari came in with a gun in her hand. During the conversation, she said that she was ordered to kill both of them. Then the captain of the army hit her on the head with a chandelier and she lost consciousness.
Sari Clayton appears in the story "Coded Triangle" in the comic book Diary  Loves 9 1951 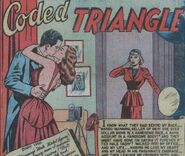 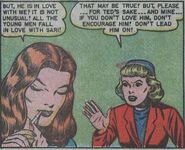 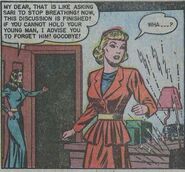 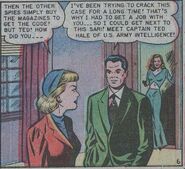 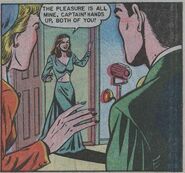 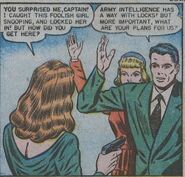 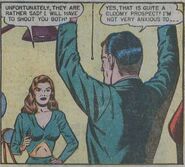 Add a photo to this gallery
Retrieved from "https://femalevillains.fandom.com/wiki/Sari_Clayton_(Diary_Loves)?oldid=157583"
Community content is available under CC-BY-SA unless otherwise noted.