Sarah Green (Marin Ireland) is the villainess of "Heartbreak", episode 1.16 of Unforgettable (airdate February 21, 2012). She was the girlfriend of bank manager Jason Kubiak, who was found dead in a baseball stadium after being dropped from a plane. When first informed about Jason's death, Sarah appeared heartbroken at her lover's death and later was opposed to the police's theory that Jason had been involved in a robbery at his bank, stating that he wasn't the kind of man to do something like that.

But when detectives Carrie Wells and Al Burns arrived at the residence of Mark Payne (where Al was forced to shoot Mark dead as he opened fire on him and Carrie), Carrie spotted a canister of tea that Sarah had at Jason's apartment. It led to reveal that Sarah had been involved in the robbery, having been working with Payne to seduce Jason into a relationship to gain access to the bank's vault of money. To force Jason into participating in the robbery, the evil Sarah faked being kidnapped, even allowing herself to be tied up during the robbery to make herself appear to be a hostage.

Carrie later learned through Sarah's mother that Sarah was the wife of Victor Cushman, and acted as his accomplice in a string of bank robberies in Europe. After stealing two million dollars worth of diamonds from a resort in Basel, however, Sarah and Victor's getaway plane crashed in the Alps, with Victor taking the diamonds and leaving Sarah trapped in the plane, where she was badly burned. Sarah was hospitalized and later released after the Austrian government failed to make a case against her in the diamond theft. Her backstory also revealed that Sarah's motive for the bank robbery was to steal back the diamonds from Victor.

After arresting Victor and agreeing to make a deal with him, Victor revealed that Sarah was a skilled pilot and would most likely be using a plane to make her escape. Carrie and Al were able to track Sarah down just as she was preparing to leave, with Carrie shooting out the tires of her plane to stop her. Sarah was arrested and signed a statement claiming she'd knocked Jason out with a fire extinguisher to make dumping him out of the plane easier, but after seeing that Mark's fingerprints were on the fire extinguisher rather than Sarah's, Carrie got her to admit the truth: that the plan had originally been to hold Jason in Jersey and release him once Sarah found the diamonds, and Mark had killed Jason to cover his tracks. After her confession, however, Sarah regretfully stated that she believed it was her fault Jason was dead. Sarah was presumably arrested offscreen for her role in the robberies and Jason's murder. 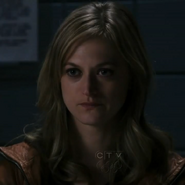 Sarah during her interrogation
Add a photo to this gallery
Retrieved from "https://femalevillains.fandom.com/wiki/Sarah_Green_(Unforgettable)?oldid=84421"
Community content is available under CC-BY-SA unless otherwise noted.