Start a Wiki
watch 04:10
The Loop (TV)
Do you like this video?
Sandy (Brigitte Kingsley) was the main villainess from the 2018 film, A Deadly View (alternately titled, Bed Rest) She is one of the neighbors of Rachel and Peter, the former being the film's main protagonist.

The couple moved to the suburbs after Rachel was robbed seven months prior in their old neighborhood, and in the events, Rachel (who was expecting) met Sandy after meeting some of the other suburban neighbors. Sandy acted friendly towards Rachel, and upon seeing Rachel's nursery, she revealed that she and ex-husband attempted to have kids of their own, but were unsuccessful, leading to their divorce.

As the film progressed, Sandy's kindly demeanor became an apparent obsession, causing Rachel to be alarmed. Rachel became further alarmed after hearing a radio news report about a six-month old baby girl being abducted in broad daylight, as she saw Sandy with a baby--despite being unable to have children. This was after seeing Sandy with an Alice in Wonderland poster, the same one as Rachel's, leading Rachel to conclude that Sandy abducted the baby. Rachel's suspicions were confirmed when she saw Sandy's nursery, as it was a dead ringer for her own.

Unfortunately for Rachel, her claims were disbelieved by (among others) Peter and his mother, Patricia, and later on, Rachel was visited by Sandy, who continued her genial personality and offered her a slice of pie that she baked. Sandy later returned and found Rachel's baby monitor on the window, and it was at this moment that her true demeanor as a psychopath was revealed, as she stopped Rachel from calling the police and brandished a knife at her. Patricia was found knocked out, as Sandy attacked her as she entered the house. She later confessed to abducting the baby, claiming that she could give her a good home, but denied killing the nanny that took care of her, with Sandy claiming that she ran away (it isn't specified if the claim is true or not). The deranged villainess revealed that she was set to have twins, and needs Rachel's baby to complete her delusional goal.

Sandy, while holding Rachel at knifepoint, took Rachel to her nursery, where the baby was heard crying. Once there, Rachel smashed a miniature vase on Sandy's head and escaped, but it was at that moment that Rachel's water broke, meaning she was set to give birth. Seeing this, the evil Sandy planned to deliver the baby herself and kill Rachel, only to end up shot (non-fatally) by Officer Diane Lee. Sandy rose up and attacked Lee with a broom handle, and later accused Rachel of not caring about her baby, adding that she cared about the babies she lost and that she'd be reunited with them again. The villainess then declared that Rachel will deliver the baby and that Sandy will have it for herself whether Rachel liked it or not, and brought out a knife in an attempt to take Rachel's unborn baby. Rachel suddenly grabbed Lee's gun, and before a shocked Sandy could react, Sandy's evil goal was forever shot to pieces when Rachel fired a single shot at Sandy's head, killing her instantly. 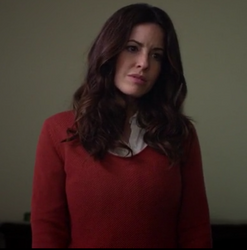 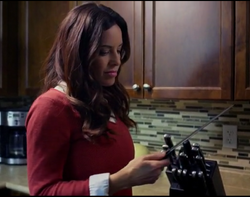 Add a photo to this gallery
Retrieved from "https://femalevillains.fandom.com/wiki/Sandy_(A_Deadly_View)?oldid=209662"
Community content is available under CC-BY-SA unless otherwise noted.