Start a Wiki
watch 01:48
The Loop (TV)
Do you like this video?
Samantha Weaver (Susan Misner) is the main villainess from "Corner Office," episode 17.10 of Law & Order (airdate December 8, 2006). She is the CEO of the Halligan-Webb company.

As the episode progressed, it was revealed that Samantha was in a relationship with Julia Veloso, a high-class escort who quit her profession once she began dating wealthy Samantha. Charlie Dillon, a lawyer for HW, found out about Samantha's relationship with Julia, and demanded millions for his silence. Samantha stood to lose about $75 million if her scandalous relationship came out, and with that, she planned to eliminate Dillon. The villainess sent Julia to seduce Dillon and then kill him, which Julia does with Samantha's pistol.

After Julia was arrested, it was revealed that the gun was registered to Samantha, as she bought it in Houston back in 1999. Detectives Green and Cassaday arrested Samantha for Dillon's murder, and after Julia testified against her lover (as part of a plea deal), the evil Samantha gave her own testimony, basically throwing Julia under the bus by claiming that she acted alone in killing Dillon because Julia would have to go back to prostitution if Samantha was ruined. In the episode's climax, Samantha met with Jack McCoy and wanted a plea deal, despite her belief that she was innocent. She lambasted McCoy for going after her solely because she was a woman with power, only for McCoy to respond that her actions were because she's a person with power, and didn't want to lose it. McCoy turned down the lesser sentence of 5-15 for second degree manslaughter, and at episode's end, Samantha was convicted of second-degree murder. 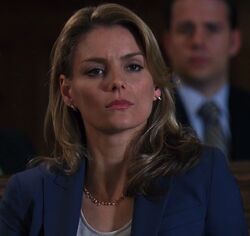 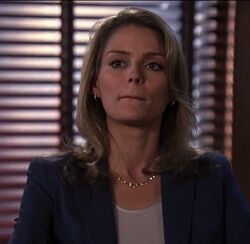 Add a photo to this gallery
Retrieved from "https://femalevillains.fandom.com/wiki/Samantha_Weaver_(Law_%26_Order)?oldid=197726"
Community content is available under CC-BY-SA unless otherwise noted.