Sally and Kowalski both work for George's arch nemesis Lyle, where they help him find the deed to Ape mountain and later on they try and help destroy the jungle. They are played by Marjean Holden & Erika Heynatz respectively.

Sally and Kowalski are first seen walking down a corridor in a hotel with Lyle to Georges room, where Kowalski uses a fake key pass to get in. Once they break in Sally turns off the alarm which is a bird, and informs the others that the deed is in Georges underwear, Kowalski thinking George won't have many, raids his wardrobe. Kowalski passes several piles to Lyle who passes them to Sally who looks horrified at holding underwear. They underestimate how many pairs of underwear George has, and after much searching and almost giving up they eventually find the deed to the Jungle, and grin menacingly.

We next see the women waiting for George and Ape outside a casino, they try and capture Ape who owes them 17 years of employment. Sally and Kowalski demand they come with them but Ape mocks them saying "who are you? Xena Princess of Vegas?" and throws a suitcase at the women disarming Sally who was holding a gun. The women chase after them and after George falls over on a pool table, Kowalski lunges at him showing her breasts. George and Ape manage to escape the evil pair by runnping down an escalator. Then as the two women are searching a old granny instead of cranny they make a run for it and resume searching for George and Ape.

The final scene is at the climax of the movie, where George is trying to stop bulldozers from destroying the jungle. Sally and Kowalski are on the last bulldozer heading to destroy the tree house which has George's wife in it! As George climbs onto the bulldozer and startles Sally he then says that he won't hit women and would appreciate it if the women didn't hit him, but Sally takes no notice and smiles as she punches and elbows George in the face. This causes him to dangle from the bulldozer, during which his head takes a painful battering from several trees. Kowalski climbs over to help Sally, and the two women grin with delight as they enjoy watching George suffer. After his head stops hitting trees Sally kicks him hard on the head in an attempt to get him off. The women then follow George as he dangles off and gets back on the bulldozer and look very surprised to see George laughing as he faces Kowalski running on a tyre as the women look at him. George says that he now has to hit the women but gives them a fighting chance. Around this time Rocky disposes of the driver and watches the evil duo. Kowalski looks shocked at first thinking she is about to be hit, and looks down and sadistically smiles before kicking his crotch so hard George goes up in the air. George groans and gives a strained face while Kowalski makes sure George falls and doesn't come back in a hurry. George in agonizing pain, thinks with a strained face in thinking how looks can be decieving from what seemed like a innocent girl, and falls off as he re thinks sportsmanship. The evil pair turn their heads inside the cab of the bulldozer thinking they have won. However, they find Rocky the Kangaroo is waiting for them, poised to attack. Realising they have been tricked the women look very confused and scared as a Kangaroo is in the drivers seat. Rocky kicks them in the face sending them flying and screaming across the jungle as they desperately try to hold on to something and hold each others hands. They both do several flips in the air and after they come crashing down in a open piece of land Rocky hops after them and promptly thinks of a way to sort the women out, as they get up panting for air. They get up not knowing what to do as, Rocky decides to teach them a lesson and jumps on their shoulders five times each making them scream and squeal in pain as their bodies disappear in to the hard ground. At first they trace and embrace Rocky, but it's no good as Rocky jumps on them and the middle of their legs hit the ground they realise Rocky isn't going to let them get away. They are last seen buried to their breasts in mud trapped, beaten and unable to escape. It is unknown what happens to them but presumably they are stuck in the mud with no way out. 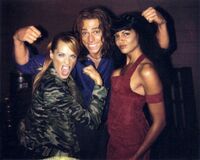