Start a Wiki
watch 01:51
The Loop (TV)
Do you like this video?
Sabrina Lynn (Laura Devon) is one of the main antagonists in the episode ‘The Velvet Trap) for the tv series ‘The Big Valley ‘. She is a beautiful femme fatale and the gun moll of criminal John Floyd.

Sabrina is first seen when her carriage gets stuck in the mud. She gets out of it, but sees a strange man watching her (later revealed to be Pierce, a man hunting John and Sabrina down. She flees through the woods with him chasing her, getting very dishevelled in the process, until she meets Nick Barkley. Swooning into his arms, he takes her to the Barkley Manor.

There, she is treated with kindness by Audra Barkley, who lends her a low-cut green dress. When Nick sees her, he is so distracted from his pool game that he damages the table! Nick and the rest of the brothers are instantly smitten with the blonde beauty, but feigning tiredness, she excuses herself and goes up to bed.

In the morning, Nick takes her to the hotel where he gets her an expensive room. Nick asks Sabrina if she wants to go on a picnic, but she declines, saying that she has to leave soon. It is also revealed that Sabrina is a stage actress. However, Nick gets into a shooting contest with another townsmember, and he showcases his impressive gun skills. Watching from the window, the seductress smirks wickedly, planning to use Nick as a tool to get rid of Pierce. When Nick is about to leave, Sabrina says to him that she will join him in a picnic.

Nick and Sabrina have a lovely picnic, where they flirt with each-other. Trying to learn more about this mysterious beauty, Nick asks her about her backstory, where she tells him one rife with tragedy (obviously faked to gain sympathy from Nick so she is endeared to him). When they get back to the hotel Sabrina tells him that this time it is really goodbye and she cannot stay with him further. When he asks why, she uses her chance and tells him that she has run away from a very bad man named Jack Floyd, and that whenever she finds love, he follows her and kills the man. Nick says that when he sees Floyd, he will end his life. Sabrina’s plan is coming together nicely.

In the streets, Sabrina is met by her lover, the real Jack Floyd, where she tells him she has a way to get Pierce off their backs. Back at the hotel, Nick comes and asks her if she wants to see the Valley by moonlight. With her plan so easily laid out before her, she says she will be ready in an hour (10 o’clock). Up in her room, Sabrina and Jack make love and she tells him her evil scheme to end Pierce.

Finding out where Pierce is staying, Sabrina goes to visit him where she declares that Jack is about to leave her for some ‘cheap hussy’ and tells Pierce that she will be saying her goodbyes to Jack in an hour. This is all a part of her convoluted scheme to get rid of Pierce so she and Floyd can settle down somewhere remote. This will make Pierce think Nick is Jack, and as he tries to shoot him Nick will kill him in an act of self-defence. Then Sabrina and Jack will be able to escape.

Later, when Nick is waiting at the stables, the villainous vamp is hiding in the stable next-door, waiting for Pierce to walk bye. Seeing him, she runs out to Nick. Pierce spots the two, and points his gun, ready to fire, although the backstabbing beauty cries out ‘Nick, it’s Jack Floyd’; this causes Nick to take out his gun and shoot Pierce. Her scheme accomplished, Sabrina makes her way to the hotel to find Jack and escape town, which she does.

Nick discovers that Sabrina had set him up to shoot and kill Pierce, so he embarks of a mission of vengeance to hunt the two rogues down.

He discovers them in a secluded house far off in the country, where Sabrina expresses her wish of settling down with Jack. The happy bad girl makes her way humming and singing in the fields, with her dream coming true. However, she is confronted by Nick! Sabrina tries to persuade Nick not to ruin her and jack’s plan, but he isn’t going to stop. In desperation, Sabrina yells to Jack that Nick is here! This starts a shootout between the two men in the barn.

Later, the gun moll sneaks into the barn with a rifle with the intent to shoot and kill Nick. However, Jack sees the front of the gun and fires, shooting his wicked lover in the arm! Jack cries out, and is shot and killed by Nick. Crying desperately, Sabrina hugs his corpse and accuses Nick of ruining everything, showing that this was all she ever wanted, although the man she used callously replied “You’re not going to have it so easy Sabrina, you’re going to live”, leaving the bad girl crying over her true love in the barn. This quote shows that Sabrina wasn’t punished for her actions, as having her dreams shattered and her lover killed was enough punishment. 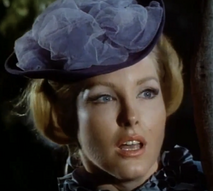 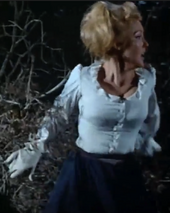 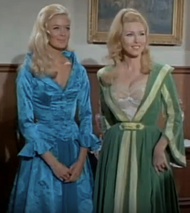 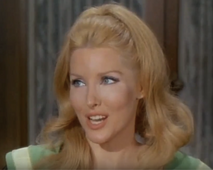 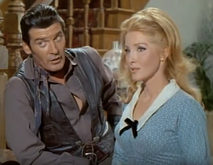 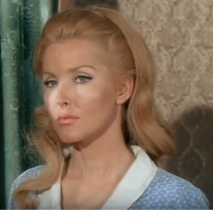 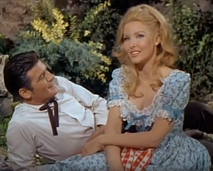 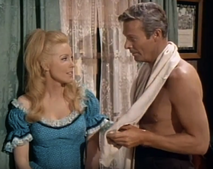 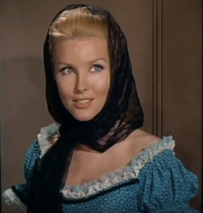 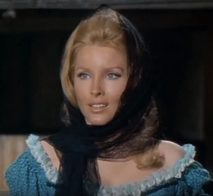 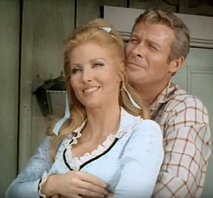 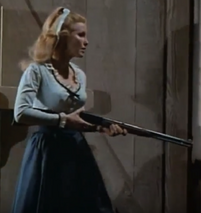 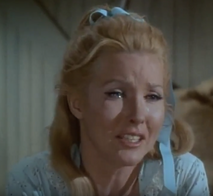 Add a photo to this gallery
Retrieved from "https://femalevillains.fandom.com/wiki/Sabrina_Lynn_(The_Big_Valley)?oldid=160711"
Community content is available under CC-BY-SA unless otherwise noted.