Ryoko (Yuko Sasaki) is the hidden villainess of "Hijacked Department Store Case", episode 1.17 of Case Closed (airdate May 27, 1996). She was an employee at the Marutan Department Store, operating the store's elevator. When Conan Edogawa and his friends got locked inside the store after closing, they found Ryoko tied up in the security office, having seemingly been taken hostage by burglars who had infiltrated the store.

But after defeating the burglars, Conan noticed the security cameras were still being operated and realized that Ryoko was not a hostage of the burglars, but rather the ringleader of the gang of thieves. Conan ran into Ryoko and, after she attempted to feign innocence, Conan revealed how he had uncovered her villainous secret, with the first clue to the guilt being the fact that she operated the escalators while her henchmen were trying to capture Conan and his friends.

After Conan's summation, the evil Ryoko mockingly praised him for deducing everything correctly before pulling out a pistol and firing at him, later chasing Conan to the roof in an attempt to kill him. Once there, though, Conan was able to disarm Ryoko by kicking a basketball at her hand holding her pistol, dislodging it before sending her floating away on a hot air balloon used for the store's advertising. Offscreen, Ryoko was brought back to the store and tied up, with the police arresting her and her cohorts when they arrived looking for Conan and the other kids. 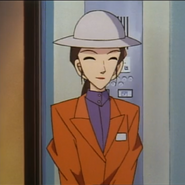 Ryoko armed with a pistol
Add a photo to this gallery
Retrieved from "https://femalevillains.fandom.com/wiki/Ryoko_(Case_Closed)?oldid=202899"
Community content is available under CC-BY-SA unless otherwise noted.