Start a Wiki
watch 01:24
The Loop (TV)
Do you like this video?
Ruth Simmons (Rya Kihlstedt) was the main villainess from the 2019 Lifetime film, Secrets in a Small Town (alternately titled, Nowhere and Nowhere to be Found; airdate April 13, 2019).

Ruth Simmons was the head coach of a small town girls high school basketball team, which had her daughter, Kat, as the team captain. She was shown briefly watching new student Sarah Porter - the daughter of the school's newly hired vice principal Claire Porter - shooting jumpshots, and it led to Ruth approaching Claire regarding Sarah joining her team. With Claire's permission, Sarah practiced with the team, and afterwards, Ruth welcomed her to the squad.

Following practice, Sarah went with her new teammates to a party, but on the next morning, Claire woke up and saw that Sarah hadn't returned home, leading Claire to suspect that something had happened to her daughter. Per Claire's demand, Kat and her teammates were interviewed, one by one, by police, and they gave the same story: claiming that Sarah got drunk and trashed her new teammates before leaving the party. Claire refused to believe their claims, and Ruth appeared in support of Claire after the interviews and during the search for Sarah, which took place in a wooded area.

After a cellphone was found in the area, Ruth went to a nearby shack, with Kat closely behind her mother. Once she arrived, Ruth opened the door and found a bruised Sarah inside, who expressed relief over seeing her coach, who informed Sarah that she would help her before Kat arrived at the scene. In a shocking instant, Ruth turned heel by locking Sarah inside the shack and scolding Kat for telling her that Sarah was dead, revealing that Ruth had known that her daughter and teammates had some role in Sarah's disappearance. Ruth's heel turn was further cemented when she talked Kat out of calling the police, stating that Kat should not throw everything away for Sarah.

As for Claire, Ruth suggested to her that they search the river, only to not find Sarah, who was believed to be deceased by many at the school. A distraught Claire found a newspaper article about a freshman who committed suicide after she was hazed, and after seeing Kat's connection, Claire confronted Ruth about the past incident, with the villainess claiming to be haunted by the death, but also defending the hazing by revealing that she was "tested" during her time in the military. In response to Claire stating that her girls were players and not soldiers, Ruth stated that there was no difference, while also warning Claire to stay away from the girls.

However, Claire received a video of the team giving an alcoholic beverage to Sarah, and it was uncovered that the video was sent to Claire's phone by none other than Kat. Claire confronted Kat at her home, where the truth was revealed: the girls hazed Sarah by pouring alcohol into her, but it went wrong when a trust fall resulted in Sarah's injuries. Sarah was placed inside the shack by the group, and during Kat's confession, Ruth became alarmed and confronted her daughter. After Kat stated that she told the truth about Sarah, the evil Ruth slapped her daughter and berated her for throwing away everything for someone she didn't know.

After Kat rejected her villainous mother's attempt to comfort her, Ruth grabbed a shovel and tarp and went to the shack with plans to bury Sarah, who was still alive inside the shack, all the while, Claire returned to the area to find her daughter. Upon seeing Ruth in the process of burying Sarah, Claire tackled the villainess and cradled Sarah, only for Ruth to point a gun at Claire and tell her to move away from Sarah, as she planned to kill her. Ruth additionally ignored detective Rich Watchorn when he arrived and ordered Ruth at gunpoint to drop her weapon, with the deranged villainess voicing her willingness to do whatever it took to protect Kat. During the confrontation, Sarah pointed at the tarp Ruth was standing on and told Claire to pull it from under her--similar to a magic trick they watched on TV. Claire does so, and in the process, Ruth struck her head on a rock and was killed instantly. 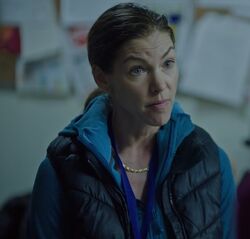 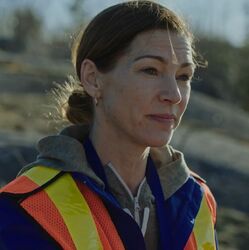 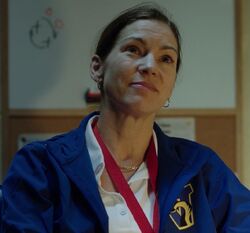 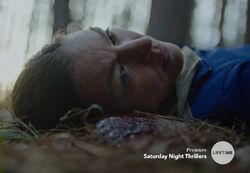 Ruth after being killed by Claire
Add a photo to this gallery
Retrieved from "https://femalevillains.fandom.com/wiki/Ruth_Simmons_(Secrets_in_a_Small_Town)?oldid=181084"
Community content is available under CC-BY-SA unless otherwise noted.