Start a Wiki
watch 01:50
The Loop (TV)
Do you like this video?
Ruby Asher (Lindsay Hartley) is the main villainess from the 2017 film, Deadly Attraction.

Ruby's backstory revealed that she was in an abusive marriage, which resulted in the conception and birth of their daughter, Amanda. As shown in the beginning of the film, Ruby was on the receiving end of verbal and physical abuse from her husband, with the argument taking place in Amanda's room, where the young infant in her crib. The altercation ended with Ruby picking up a gun and shooting her husband to death.

Ruby raised Amanda on her own in the 17 years that passed; however, Ruby adopted a misandrist demeanor due to her abuse. The film's events showed her married to wealthy Daniel Nash for three months, though she was also having an extramarital affair. She overheard Daniel discussing a prenup with his attorney, with Daniel planning to remove the agreement and leave everything to Ruby. Daniel found out about the affair and confronted Ruby, and after their argument, Ruby turned heel by putting her plan to kill Daniel in motion. The villainess opened containers of ammonia and other chemicals and intentionally spilled them, after which she watched as the chemicals killed Daniel.

Ruby acted shocked over Daniel's sudden death, but she voiced her dismay to Amanda over only receiving $200,000 as part of her inheritance. The greedy villainess moved herself and her daughter to Seattle and set her sights on wealthy and widowed philanthropist Nicholas Landon, officially meeting Nicholas at one of his gatherings. She charmed not only Nicholas, but his daughter, Teresa (the film's eventual main protagonist); the former so much that he quickly married her. Regarding Amanda, she developed feelings for Michael, who worked for Nicholas, only for Ruby to discourage the budding relationship by stating that men can't be trusted, and even slapping Amanda when she argued against her.

After learning about Nicholas' asthma, the evil Ruby poisoned one of his inhalers late one night, and activated her plan the following morning when she sprayed perfume in his face. After his attack, Nicholas received the poisoned inhaler from Ruby and began to succumb to the effects, after which Ruby took away his phone and prevented him from calling 911, sadistically watching Nicholas die. Teresa became suspicious regarding Ruby after her uncle (Nicholas' brother) Joe Landon informed her of Ruby's villainous past via a private investigator, and it was after Nicholas' death that Teresa was convinced of Ruby's villainy. Ruby found out about Joe's investigation, and it was later on that she appeared in Joe's car and held him at gunpoint, while ordering him to handcuff himself. She revealed everything to Joe before he pulled over and attempted to escape, only for Ruby to shoot Joe to death. Upon returning home and seeing Amanda with Michael, Ruby snarled at both of them; telling Amanda that they were leaving and ordering Michael to stay away from her daughter.

Six months later, Ruby and Amanda were in Oregon, where the former was mugged in the parking lot. The mugger was taken down by a man who introduced himself as Dr. Carroll Dance, who later asked out Ruby. After their meeting, Ruby voiced her happiness over her new surroundings, but snapped at Amanda when she mentioned her mother destroying her relationship with Michael, as well as her past husbands. While out with Carroll, Ruby was surprised to see Teresa, who had been pursuing Ruby and trying to take her down for her father's murder, which appeared to drive Carroll away, until he visited Ruby and stated that he wasn't concerned with Ruby's past.

Ruby later spotted Teresa's car nearby, and was surprised to see her with Carroll, who was revealed as the PI who Joe contacted regarding Ruby. Carroll, Teresa, and Michael were all working to take down Ruby, and after seeing them, Ruby decided to phone Teresa and arrange a face-to-face meeting at the former's home. After Teresa arrived, Ruby confessed to killing Nicholas before holding her at gunpoint, after which she revealed that there were others, including Teresa's uncle Joe. The villainess planned to kill Teresa and claim self-defense, portraying Teresa as having broken in to her home. Teresa was able to disarm Ruby, leading to a brawl between both women. Ruby picked up a knife before Michael and Amanda entered and caught both of them, with Teresa later holding Ruby at gunpoint. Before Ruby could attempt to lie, Amanda stated to her mother that it was over, revealing that Amanda finally found out about Ruby's evil actions. Ruby was shown handcuffed and placed in a police car, having been arrested for her murderous actions. 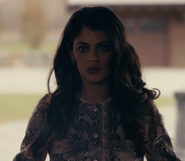 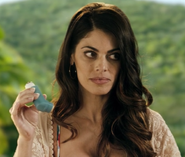 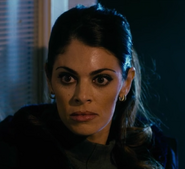 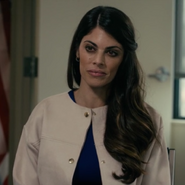 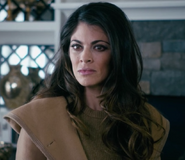 Add a photo to this gallery
Retrieved from "https://femalevillains.fandom.com/wiki/Ruby_Asher_(Deadly_Attraction)?oldid=169079"
Community content is available under CC-BY-SA unless otherwise noted.