Start a Wiki
watch 01:39
The Loop (TV)
Do you like this video?
Roxanne "Roxy" Harmon (Tara Lynne Barr) was the main villainess of the 2011 film God Bless America. She was a Holy Cross High School student who first encountered Frank Murdoch (the film's main protagonist/villain) as he was parked outside her school, having made plans to kill her classmate Chloe, the spoiled star of her own reality show.

When his attempt to kill Chloe by setting her car up to explode failed, Frank instead killed Chloe by shooting her in the head. Chloe bore witness to Frank killing Chloe, with her ecstatic beaming at the sight serving as a reveal to Roxy's psychotic nature. Roxy later tracked Frank down to a hotel room he was staying, showing him her joy at him having killed Chloe and asking for details, while also jumping on the bed and making suggestions of other people he could kill. After seeing that Frank had come to the hotel to commit suicide (having lost his job and found out he had an inoperable brain tumor), Roxy angrily blasted Frank as "weak" before challenging him to do so while she watched. Ultimately, though, Roxy convinced Frank not to kill himself and instead go about killing other people who deserved it, with Frank agreeing after Roxy suggested he kill Chloe's parents.

Frank drove with Roxy to the house and proceeded to shoot and kill Chloe's father, only for his wife to nearly escape due to Frank's gun jamming. But before she could flee, Roxy came into the house and kill her with a knife, gleaming at her act and telling Frank she was about to escape when he blasted her for leaving the car. While attempting to clean the blood off themselves at a car wash, Frank attempted to reject Roxy's pleas to let her join him in his killing spree by asking about her family, with Roxy claiming that her mother was a crack addict and that she was being raped by her mother's boyfriend. With that, and Roxy's claim of having no friends to depend on, Frank allowed Roxy to join him, though the duo later got into a fight at a thrift shop when Frank refused to say whether he found Roxy attractive or not, with Roxy accusing Frank of thinking she was ugly.

The pair reconciled after Roxy bought them outfits resembling those of Bonnie and Clyde, with the two wearing them when they went to a movie theater and opened fire on the noisy patrons, with Frank shooting and killing the patrons (barring a teen who had attempted to quiet her noisy friends) after Roxy missed two shots at the teens. Later on, after Frank helped Roxy practice her shooting in the forest, the pair saw a news report about the movie theater massacre, with Roxy gushing over their new found "fame" before getting into a heated discussion with Frank over their next move, with Frank chiding Roxy for wanting to kill Diablo Cody due to not liking Juno. After agreeing to continue killing people who they believe deserve to die for the benefit of society, the villainous duo targeted hate-mongering conservative TV personality Michael Fuller for their next victim, with Frank and Roxy (the latter wearing a red ski mask) shooting him with pistols from afar as he jogged through a park before going to check to see if he was dead. It was then that Michael held the pair at gunpoint, with Roxy pointing her own gun at Michael as Frank revealed he went after him not because of his politics, but for being hateful on his show. Roxy also blasted Michael for using his parents' wealth to dodge the military draft and revealed she actually did hate his politics before shooting him to death.

After Roxy and Frank stalked the latter's ex-wife Alison and estranged young daughter Ava from afar, with Frank turning down Roxy's suggestion to kill Alison's new fiancee Brad due to wanting him to suffer having to deal with the bratty Ava, Roxy took note of Frank's stress (unaware that his headaches were caused by a tumor) and suggested he take a "vacation". It was then that the two continued their killing spree while vacationing, with their victims including right-wing tea party members, a man who double parked his car, and homophobic religious protestors. In the case of the protestors, the evil Roxy opened fire on the group herself while Frank struck the lead reverend with his car, with Roxy laughing with Frank before helping him tie and gag the man before dumping him off a cliff, killing him.

While laying low in their hotel room one night, Roxy made the suggestion that they run away together to France, arguing that the French hated America and that they could start a new life together without fear of the police catching them. While initially lukewarm on the prospect, Frank agreed to the idea after calling his doctor and learning that he actually didn't have a brain tumor. Later on, however, Frank saw a news report of Roxy's parents, Jeffrey and Susan, tearfully pleading for their daughter's safe return home, with Frank being angered by the revelation that Roxy had lied about coming from an abusive home.

After killing a man who had believed him to be a pimp and Roxy a prostitute, Frank began packing his things while confronting Roxy about her deception, with Roxy admitting to lying about being abused while claiming her parents never tried to understand her and that her life was still miserable because she felt like she was always being told what to do by people she was smarter than. Still angered by Roxy's lie, Frank gave her the keys to his stolen car before taking off in his latest victim's truck, admonishing Roxy as a liar before driving off as his villainous cohort threw insults at him. As Frank suggested to her, Roxy returned home, with Frank watching on the news report as a disheartened Roxy stood by her parents as they gushed over her return, with the news believing Roxy to have been kidnapped by Frank.

In the film's climax, Frank took the audience of the singing competition show American Superstarz hostage, having becoming disgusted with the show's mocking concert dedicated to autistic auditioning contestant Steve Clark, who had been mocked by both the show and its' audience to the point where he seemed to be driven to attempt suicide. During the hostage situation, Roxy suddenly appeared and warned Frank of a security guard sneaking up behind him, allowing Frank to kill him. After going onto the stage with Frank and apologizing to him for lying, Frank went into a tirade against the terrible state of society, after which he assured Roxy that she was pretty before she took his automatic rifle. After giving each other a knowing nod, the two began opening fire on everyone (including Steven, who revealed his suicide attempt was because he believed he wouldn't be put on TV anymore) before they were both gunned down by the police. 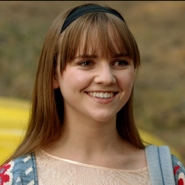 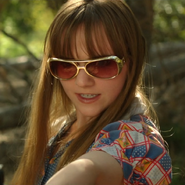 Roxy shooting at the religious protestors
Add a photo to this gallery
Retrieved from "https://femalevillains.fandom.com/wiki/Roxy_Harmon_(God_Bless_America)?oldid=163958"
Community content is available under CC-BY-SA unless otherwise noted.