Roxy (ロキシー) is a henchwoman in the 1989 Arcade side-scrolling brawler "Final Fight" (ファイナルファイト).

She is a member of the violent Mad Gear gang.

A lot of misinformation regarding the sex of both Roxy and her more popular palette swap Poison made the two subjects of scrutiny and controversy for decades. However, while Poison was ultimately confirmed to be a transsexual, official confirmation was also given to Roxy in 2005 that she is biologically female.

In the SNES release, she and Poison were replaced by male characters Billy and Sid, who are dressed like stereotypical punks. 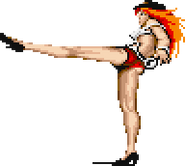 Add a photo to this gallery
Retrieved from "https://femalevillains.fandom.com/wiki/Roxy_(Final_Fight)?oldid=206083"
Community content is available under CC-BY-SA unless otherwise noted.