Roxie Ames, played by Virginia Martin, plays the gorgeous but attention hungry Magician's Assistant in the 1965 episode "It's Magic" in the TV show "Bewitched".

Roxie has left her act after The Great Zeno (Walter Burke), a broken down magician has taken up drinking and lost his touch. Samantha (Elizabeth Montgomery) has the task of finding an act for the Hospital Fund Auxillary, and asks Zeno to perform. As a result, Samantha fills in for Roxie as his assistant, and through witchcraft makes Zeno confident and a successful magician again. Zeno is rewarded by getting a job on TV to showcase his act.

On the night that Zeno is to perform, Roxie shows up and uses her manipulation to intimidate Zeno into inserting her back in the show. Roxie is next on the stage with a long shimmering gold gown. She hogs the show by commanding attention of the camera and in the process destroys the show and Zeno's confidence. During an intermission, she admits off stage that she returned just to get a regular spot on TV for herself. Then she proceeded to tell the camera man to make sure she gets plenty of shots of her. The camera man walks over to Samantha standing off stage and says "Boy, this dame is murder". Samantha responds, "She is sure of herself". Camera man says, "She's hogging the whole bit. Why doesn't Zeno stop her?". Zeno pours water on Roxie by accident, and she tells him "Watch it stupid, you're getting it all over me." When Roxie continues to hog the stage, Zeno asks her "Roxie, you're killing me, why?". Roxie responds that "Because, this is little Roxie's big chance, you jerk. I'm going to get a regular spot as a variety showcase girl." Roxie spots Samantha backstage holding a prop. She marches toward her and tells her to get off the stage. Then she proceeds to tell her, "Get off the stage sister, or 40 million people are going to see you with no teeth.

Samantha can take no more as her anger toward Roxie is brewing. When Roxie is asked to place her hand into an empty glass fishbowl it gets stuck in it. Samantha is responsible by using her spells to trap her hand. Roxie struggles to get it released. As she walks by Zeno who is pushing a cart full of props, he accidentally rubs a cart by the sleek yellow gown that Roxie is wearing, and the back of the dress rips off. It reveals her white girdle that she is wearing. The crowd erupts with laughter and Roxie is totally embarrassed to be exposed. She shouts at Zeno saying that he did it on purpose, then she rears back and attempts to throw the fish bowl at Zeno. Just then, Samantha makes a puff of smoke mushroom around Roxie and when the smoke clears, she is gone. The crowd gasps and then completely erupts into laughter and applause....at Roxie's expense no less. Two of the audience members are the Kravitz family, who is the neighbors of the Stephens family. Abler Kravitz (George Tobias) is clapping, and says out loud, "Bring her back, bring her back". At this his wife Gladys (Alice Pearce) elbows him in the stomach. Abner obviously was attracted to the magician assistant as much as most people on this site.

After Zeno rallies and finishes the show successfully, he finds out that he has been booked for thirteen more weeks by one of Darrin's clients. Zeno asks Samantha "What happened to Roxie". Samantha responds, "Don't you worry about it, she'll be back. Now this is your big moment, you go back out there and make the most of it."

She is not seen in the movie again. Don't know if she was zapped to another place, changed into another object, or what. 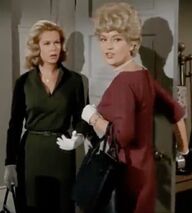 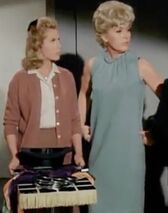 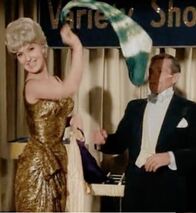 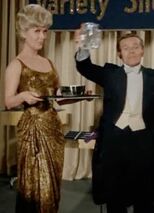 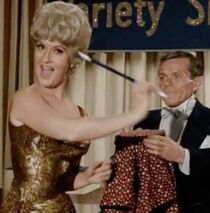 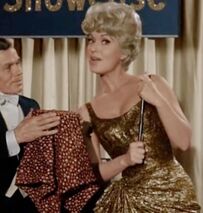 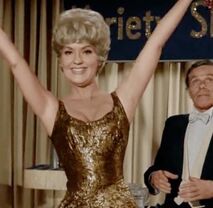 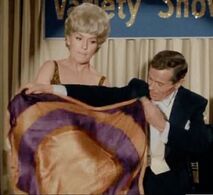 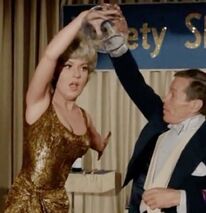 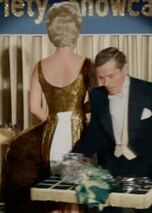 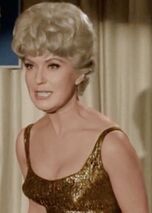 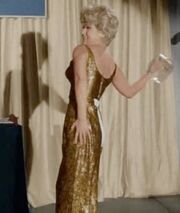 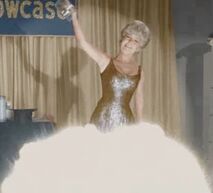 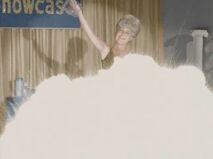 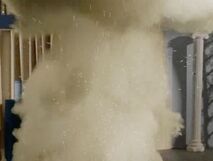 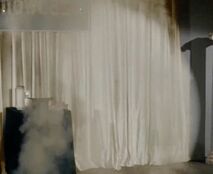 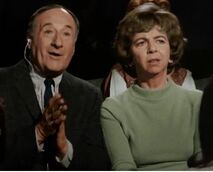 Add a photo to this gallery
Retrieved from "https://femalevillains.fandom.com/wiki/Roxie_Ames_(Bewitched)?oldid=202242"
Community content is available under CC-BY-SA unless otherwise noted.