Rowena MacLeod (Ruth Connell) is a extremely powerful natural witch. In the TV Series Supernatural. She appeared in 28 episodes in seasons 10-13, which ran from 2014-2018.

Rowena was the mother of Crowley, who was originally named Fergus Roderick MacLeod. She was also the grandmother of Gavin MacLeod.

Rowena was the main antagonists in Season 10. In season 11 she continued her efforts to gain power, eventually teaming up with Lucifer upon promises of being his queen. After helping Lucifer free himself, Lucifer snapped her neck so he couldn't be trapped in the cage by her again. However, she was able to resurrect herself with a spell she had prepared beforehand. She was killed a second time and he burned her body to try and prevent another resurrection. Despite this, Rowena was resurrected again, though it took her a very long time to heal from the damage Lucifer caused. Some time later, a witch hunt with the Winchesters allowed her to obtain a spell to restore her full power, which had been sealed a long time ago.

Rowena later went on a killing spree of Reapers to coerce Death into resurrecting her son, and she felt guilty for having failed him. This led to both her demands being rejected as well as Dean informing her that her permanent end would be caused by Sam. Rowena then accepted her loss and sided with the Winchesters to save their mother and Jack.

She took part in capturing Lucifer himself, bound him and was tasked with watching him, until he eventually broke free and tried to kill her, before she managed to repell him right through the rift. Initially wanting nothing more to do with the Winchester now that Lucifer was free again, she realized that she was their only hope of making it back home, and prolonged the opening so that they could return. 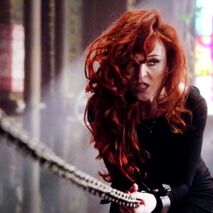 Add a photo to this gallery
Retrieved from "https://femalevillains.fandom.com/wiki/Rowena_MacLeod_(Supernatural)?oldid=204656"
Community content is available under CC-BY-SA unless otherwise noted.