Start a Wiki
watch 01:51
The Loop (TV)
Do you like this video?
Rowena Labuschagne is one of the main antagonists in the 1993 film Yankee Zulu. Her character is played by Terry Treas.

Through a ridiculous chain of events she is eventually defeated and thoroughly humiliated at the hands of two kids, one of which is suppose to be Prince_William.

The kids use a variety of booby booby traps, and the scenes are very slapstick in nature and played for laughs.. First she is shot with a sling shot while she is the passenger in a car. When she gets out to pursue the kids she is knocked around by a booby trapped gate. While the antagonists are distracted by the gate the two kids attach cables with meat attached to the end of them onto the bumper of the villain's cars. A tree felled by one of the kids causes the vehicle to stop, while Rowena gets out to investigate a lion pulls at the meat and startles Diehard who fleas stepping on Rowena's stomach as he does so. Rowena however see's the kids leave on their own vehicle and uses a random bike to pursue them. The bike of course is booby trapped with a very long bungee cord attached to it. At the other end of the bungee cord is a large sack of flower.The girl lets go of the bungee cord and the flower hits Rowena with a massive force covering her in flower. A girl throws a large Ostrich eggs onto Rowena's face from a nearby cliff as she attempts to recover. Eventually the mother Ostrich comes and chases Rowena, eventually kicking her off of a cliff into a lake. Rowena is immediately terrified by the pretense of an angry hippo and swims towards the shore in fast motion. Rowena desperately clings onto a random rope near the shore, only to be propelled upwards by a large bucket, presumably filled with something heavy. In true slapstick fashion Rowena's head is propelled into a bucket of syrup. Rowena has to use a ton of strength to dislodge the bucket from her head, she finally does it ripping out much of her hair, she screams with syrup dripping off of her face at the bucket that contains much of her hair. Rowena looks over to a conveniently placed mirror and is horrified by her own appearance. Foolishly she exits the tree on a zip line that is defective, she is dropped from the zip line into an old mine cart filled with oil. One of the kids shoots the mine cart with a slingshot and Rowena is sent cascading on the mine cart down a slope, her face black with oil. Rowena is horrified when she sees that the mine cart track is ending and she is going to be launched. Launched she is! The mine cart explodes for some reason and Rowena is left unconscious and hanging from a tree.

Finally Rowena is taken and hung upside down from a bridge. Rowena panics after waking up and the boys interrogate her for some information. When Rowena spills the beans one of the boys cut part of her rope with an ax, and Rowena falls dangling ever closer to her own demise. Rowena is in hysterics, still covered in oil, thoroughly defeated and humiliated. 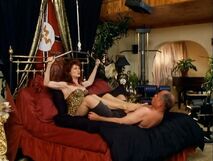 Rowena demands to be pleasured 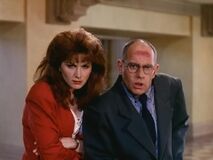 She is a dangerous woman 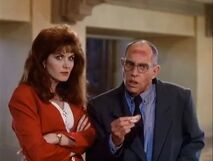 Rowena is a skilled fighter 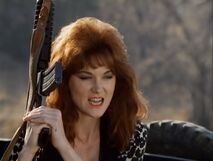 Heavily armed nobody can stop her 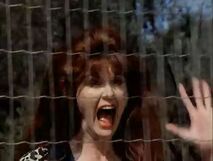 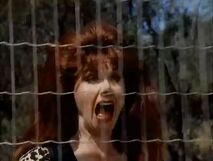 The wicked is a bicycle in the countryside, not the silly unsuspecting and takes.

But the bike is attached, As well as being naughty she is stupid, and it will be horribly ugly soon. 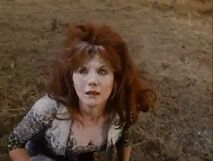 She see it as something that falls from the cliff.

What she does not know is that she has received over the head an ostrich egg.

She wants to continue his turpitude.

But the ostrich is not happy.

And it runs right on the bitch with red hair. 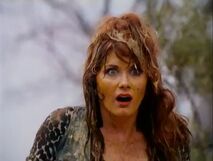 Here is the race between the ostrich and the whore.

And this is the ostrich wins.

And the slut who loses.

But it's not over for the infamous Rowena.

And she deserves what happens to him.

And presto, it falls into the trap. 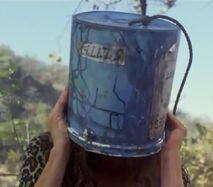 She sees her red hair in the bucket.

And is ideally placed to miroire she sees his face with balding skull.

But the nasty redhead hope to get by.

In a sticky situation...

Completely destroyed and humiliated
Add a photo to this gallery
Retrieved from "https://femalevillains.fandom.com/wiki/Rowena_Labuschagne_(Yankee_Zulu)?oldid=202170"
Community content is available under CC-BY-SA unless otherwise noted.