Rosa (Tasia Valenza) is a female thug that appears in the 2004 video game Spider-Man 2. Although not named in-game, inspecting the game files reveals this enemy’s name as Rosa.

Blonde Variation: short blonde hair and wore a black leather jacket onto of a black tank top. She also wore purple and black striped jeans held on by a skull belt. She also has a large tattoo on her lower back, while sporting blue lipstick. Notably, she is the only variation with a septum ring.

Latina Variation: short brown hair with a red bandana and wore a green leather jacket on top of a red sports bra. She wore regular blue jeans. This variation also had purple eye shadow and a tattoo of a snake on her hip.

African American Variation: short dark brown hair and wore a denim jacket on top of a purple sports bra. She wore gray pants (held on with a skull belt) with a purple floral pattern on them. Additionally, this variation wore purple lipstick.

Rosa occasionally fights using her bare hands but will sometimes attack the player using a wrench, pistol, crowbar, or sub machine gun. When fighting bare handed, she will attempt to either punch him or kick him. If she is successful in hitting Spider-Man with a kick, it will knock him back, which can leave him open to another attack. Also, if Spider-Man is a distance away from her and if she has no ranged weaponry on her, Rosa will also attempt to hit Spider-Man with a glass bottle which can be hard to dodge. She can also easily dodge Spider-Man's webs easily if faced head on, which can make tying her up and disarming her difficult. However, she can easily be tied if targeted and hit by a web-ball. Also, unlike some of the male thugs of the game, Rosa cannot block any of Spider-Man's attacks, making her an easy opponent to easily knock out in a straight fight.

In a story mission, Rosa can be seen attempting to rob Mary Jane Watson in an alley with two other thugs. She is stopped and knocked unconscious by Spider-Man before presumably being arrested.

Throughout the game, she can be seen committing other various crimes such as armed robbery, breaking and entering, as well as general harassment of the innocent civilians. All crimes result in Spider-Man knocking Rosa out cold.

Using a deblurring algorithm, the original textures can be brought to a higher definition of what they were originally supposed to be, and they are shown in the gallery below. 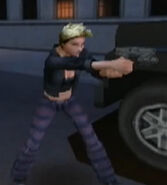 Spider-Man grappling with the Blonde Rosa

HD version of the blonde Rosa

HD version of the latina Rosa

HD version of the Latina knocked out Rosa

HD version of the knocked out african american Rosa

All Rosas knocked out and hung by their legs on a streetlight
Add a photo to this gallery
Retrieved from "https://femalevillains.fandom.com/wiki/Rosa_(Spider-Man_2)?oldid=201476"
Community content is available under CC-BY-SA unless otherwise noted.