In GIRLS ARE FOR LOVING (1973), two women who like to be in control face each other in a battle over jealousy and weaknesses. The US is about to sign a trade treaty with an Asian country; in exchange for friendly relations, the US will loan the Asians money to purchase US goods under contract. Evil siren Ronnie St. Clair (Sheila Leighton, billed as Joycelyn Peters) tries various ways to find out which US companies will get these contracts, so that she can do some inside trading to make money on the stock market. The CIA hires gun-carrying, man-eating chanteuse and stripper, Ginger MacAllister, to put a stop to Miss St. Clair's plan.

Ronnie St. Clair is a baby-faced but shapely and ruthless woman who will stop at nothing to achieve her goals. Totally asexual, she thinks nothing of walking around totally nude in front of her drooling henchmen. In one scene, she toys with a captured agent before killing him with a bullet between the eyes. (linked scene is edited, unfortunately)

She has a couple of rousing catfights with heroine Ginger (Cheri Caffero) and in the final confrontation, Ginger has defeated the evil Ronnie and lays her out on a bed, ordering her at gunpoint, "Split! And I mean split WIDE! Or I'll blow a hole in you that would service an elephant!!" The asexual (and supposedly virgin) villainess is bound spread-eagle and taken by Ginger's black agent friend. (Ronnie had previously ordered Ginger's rape by her henchmen.) 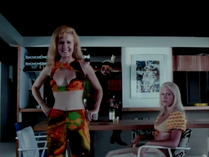 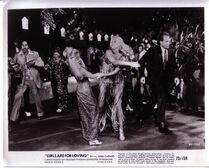 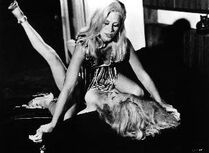 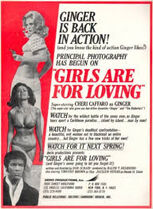 Retrieved from "https://femalevillains.fandom.com/wiki/Ronnie_St._Clair_(Girls_Are_For_Loving)?oldid=208006"
Community content is available under CC-BY-SA unless otherwise noted.