Start a Wiki
watch 01:50
The Loop (TV)
Do you like this video?
Rochelle Zimmerman is a main character in The Craft. She is an aspiring witch who forms a coven with Sarah Bailey, Nancy Downs and Bonnie. She uses magic to get revenge on a classmate who bullies her, but gets more than she bargained for.

She is portrayed by Rachel True.

Very little is known about Rochelle's life prior to the events of the film. In a deleted scene, it is revealed that Rochelle is the only African-American girl in her school and neighborhood, and that when she first arrived, no one would talk to her except Nancy Downs. Rochelle is a target for racist bullying, isolating her. Fortunately, Rochelle befriended Nancy and Bonnie and they began practicing witchcraft together. She seems to be the most "normal" (with no familial, psychological or physical issues) one out of all the four witches.

Rochelle is a skillful athlete as well as a member of her school's swim team. However, she is frequently bullied by other students, in particular by Laura Lizzie, a racist girl who has no qualms about humiliating her in public. One such incident involved Laura racially insulting Rochelle's hair, after which Rochelle confronted her, asking "Why are you doing this to me, Laura? Do you think you're funny?". Laura replies unashamedly "Because I don't like negroids, sorry".

Once Rochelle achieves real magical powers with Sarah Bailey initiated into her coven, she casts a spell that causes Laura's hair to begin to fall out. Although initially jubilant, she eventually sees how much pain and suffering she has put Laura through, and feels regret.

When a disheveled Sarah arrives on Rochelle's doorstep after Chris Hooker attempted to rape her, Rochelle is shocked and immediately comforts her. She (presumably) contacts Bonnie and Nancy straight away and the four of them have a meeting on what to do, deciding to gatecrash a party they know he'll be at. Whilst Nancy goes upstairs with Chris, Rochelle is intercepted by a remorseful Laura who asks how she's doing. Nonplussed, Rochelle pointedly replies, "fine".

As she, Bonnie, and Nancy grow more powerful in witchcraft every day once Nancy has invoked Manon, she gradually begins to abuse her magic. Taking the lead from Nancy, Rochelle and Bonnie both start to use spells against Sarah, culminating in them trying to kill her and make it look like a suicide attempt. After Sarah invokes Manon herself for protection, she makes Bonnie and Rochelle see themselves under the law of threefold in a mirror; Rochelle is bald whilst Bonnie is burn-scarred worse than before. At this, Bonnie and Rochelle flee leaving Sarah and Nancy to battle it out one-on-one.

In the days following the showdown, Rochelle and Bonnie visit Sarah's house. They offer shallow apologies, and reveal their real intent is to find out whether Sarah still has her power, as they do not. They say if she ever wants to hang out or call the corners again to let them know, to which Sarah replies, "Maybe... hold your breath until I call". Rochelle mutters to Bonnie as Sarah walks away that Sarah probably doesn't have any powers anyway, and Bonnie sniggers. Turning back, Sarah causes a bow from the tree above them to snap, and they have to dive onto the ground to avoid it. They look up at her in shock and she warns them, "Be careful. You don't want to end up like Nancy."

Rochelle initially comes across as being a friendly, fun-loving girl, who enjoys swimming. She is one of the more easy-going members of the coven, being prone to making jokes and wisecracks and only occasionally letting her negative feelings show. However, her confidence has been knocked due to the ostracization and persecution she receives due to her status as the only African-American in her school, in particular from Laura Lizzie. Rochelle at first tries to take the moral high ground, confronting Laura about her bullying in a non-aggressive manner or trying to ignore her, but her constant taunting leaves Rochelle bitter and vengeful. Like Nancy and Bonnie, she is chaotic, dangerous, remorseless, and merciless. Rochelle is also boisterous, bloodthirsty, vicious, and highly sadistic too.

Rochelle seems largely unconcerned by the prospect that they are misusing their powers, though she is shown to be shocked when she sees what her spell has done to Laura Lizzie and appears to be remorseful. However, this does not stop Rochelle from terrorising Sarah, though she agrees with Bonnie that Nancy has taken things too far. Rochelle does not appear to very sincere when she 'apologises' to Sarah at the end and dismisses her actions as a mere 'joke', though Sarah clearly doesn't see the funny side

Rochelle possesses the ability to manipulate mystical forces, allowing her to cast spells and use supernatural powers such as telekinesis, levitation and glamouring. She represents the element of water, and possibly possesses intuitive abilities.

Sarah and Rochelle shared very little dialogue, except when Sarah helped her perform the spell on Laura Lizzie. However, Sarah did aid Rochelle in her spell against Laura, pulling a hair out of her scalp as she passed her in the hallway to use in Rochelle's spell.

Nancy befriended Rochelle when no one else wanted to be friends with the only black girl in school. She confides in Rochelle off-screen that she is miserable that her spell isn't working, as she "doesn't want to be white trash anymore". Rochelle seemingly completely misses the point, replying "you're white, honey; deal with it".

Rochelle and Bonnie frequently poke fun at each other and are close because they are not as powerful as Sarah and Nancy. They are perhaps the closest pair in the coven.

"... she doesn't want to be white trash anymore, and I told her, 'You're white, honey, deal with it'"
—Rochelle to Sarah and Bonnie about Nancy

"I drink of my sisters and I ask for the ability to not hate those who hate me. Especially racist pieces of bleach-blonde shit like Laura Lizzie."
—Rochelle at the coven initiation rite 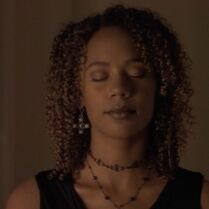 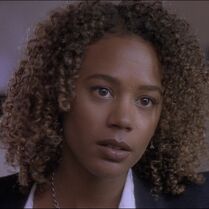 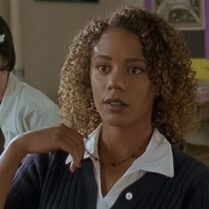 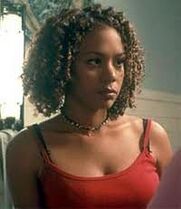 Add a photo to this gallery
Retrieved from "https://femalevillains.fandom.com/wiki/Rochelle_Zimmerman_(The_Craft)?oldid=205074"
Community content is available under CC-BY-SA unless otherwise noted.