Robin (Spitz) Swallows played by the actress, Gia Carides, is an employee of Dr. Evil (Mike Meyers) in the 1999 film, "Austin Powers: The Spy Who Shagged Me".

Robin is an assassin/henchwoman who encounters Austin Powers (Mike Meyers) in his apartment during a dance party. Robin is wearing a 60's go go type dress with a black and white alternating pattern. She has white heels that match her white hoop earrings. She has a reddish brown hair that she wears in a bob just above her neck.

In a deleted scene, Powers and Robin greet each other with a friendly shake. This lasts an uncomfortable amount of time as he shakes over and over again, while watching her breasts bounce up and down. The camera stares at her bouncing boobs and then Powers slowly makes his way up to her face. She asks if he is done, and he says not quite. He continues to look back down at her boobs and you can see that he is somehow pleasuring himself at least in his mind. Back at her face, she rolls her eyes as he continues to enjoy himself. This scene is ambiguous, and at one point it looks like it's Robin pleasuring him with her hand.

Robin begins to dance with Powers. However, Felicity Shagwell (Heather Graham) has been spying on Powers with her binoculars from the balcony and makes her way down to him. Powers discards Robin on the dance floor and begins dancing with Felicity. Felicity tells him that he better play it cool and that Robin works for Dr. Evil. Felicity then walks away.

Robin cuts back in on Powers, and Felicity motions up to her 4 asian karate girlfriends to come down. They make their way over to Robin and run interference so that she can't get to Powers. Felicity continues to dance with Powers and tells him that Robin works for Dr. Evil and to be careful. She then leaves him on the dance floor to continue dancing with the persistent Robin.

Powers asks her if she knows "Mr. Evil", and she replies, that she doesn't know anyone called "Dr. Evil". This kind of gives her away.

Robin is put through the ringer, and keeps surviving. First, a dagger intended for Powers is thrown by a fellow assassin and hits her in the back. Powers saw the reflection of the assassin in Robin's eyes, and moved her in position to be hit instead of him. He then tosses her to the dance floor. Then the same assassin pulls out an MP40 machine gun and begins firing. Powers picks Robin back up and uses her as a shield for the bullets. Multiple bullets hit her in the back, and Powers once again discards her back to the floor. The assassin then pulls out a rocket launcher. Powers once again uses Robin as the go between, and the two of them are hit and thrown out the window and begin falling face forward from the high building. By this time, Robin's face is badly burned, and her hair including eyebrows have been singed. Powers slowly positions Robin in front of him, and when they land on the pavement, he uses her body as his fall. As Powers gets into Felicity's car to get away, we can see Robin's body still moving. However, we learn from Dr. Evil later, that two of his assassins are dead, which indicates that Robin died from her injuries.

Austin keeps Robin in the trunk, to be used as an emergency bullet shield. She is still alive and responding to bullets hitting her (painful moan and grimace of pain). And Robin, previously reacted violently, here apparently already resigned to his fate. When Powers tells her to get in the trunk, she just nods, exhausted. Whether Austin used the girl for any purpose other than the shield, remains behind the scenes. Perhaps she died in the trunk, unable to withstand another execution and without any medical assistance. 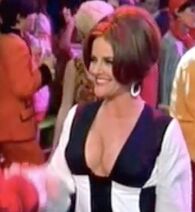 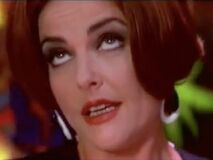 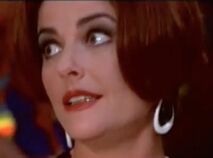 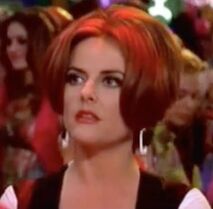 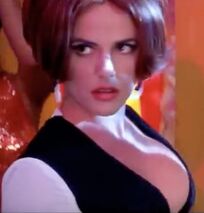 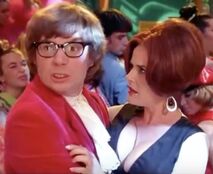 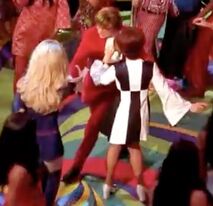 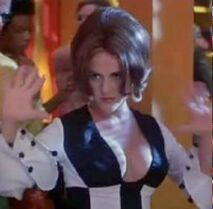 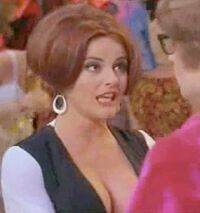 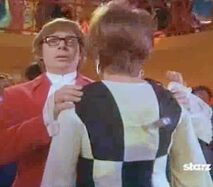 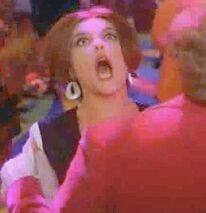 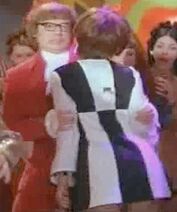 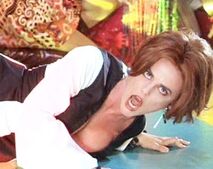 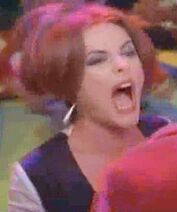 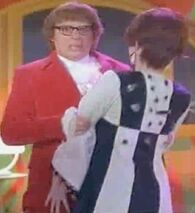 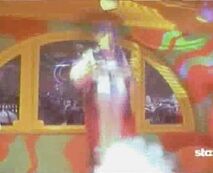 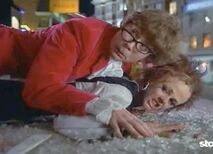 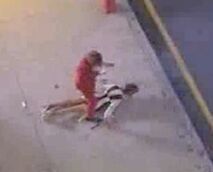 Add a photo to this gallery
Retrieved from "https://femalevillains.fandom.com/wiki/Robin_(Spitz)_Swallows_(The_Spy_Who_Shagged_Me)?oldid=208560"
Community content is available under CC-BY-SA unless otherwise noted.