Start a Wiki
watch 01:48
The Loop (TV)
Do you like this video?
Roberta Lockhart (Kate Jackson) was a hidden villainess from the original Satan's School for Girls TV film (airdate September 19, 1973). She was a student at the Salem Academy for Women, and she was part of a trio of students who welcomed main protagonist Elizabeth Sayers to the school; a trio that included fellow students Jody Keller and Debbie Jones.

When Debbie, Lucy, and later Professor Delacroix turn up dead, Roberta appeared to assist Elizabeth in her investigation, acting suspicious over the deaths. Roberta took Elizabeth down to the cellar to find a gun for protection, only to find Dr. Joseph Clampett leading a Satanic cult consisting of six girls, one of them being Jody.

At that moment, Roberta turned heel and revealed herself as a Satanic follower, pushing Elizabeth inside and shutting the cellar door. After her reveal, the evil Roberta claimed that Clampett is Satan incarnate, as Clampett attempted to convince Elizabeth to join them. Roberta, along with the other followers, perished in a fire set by Clampett as part of their sacrifice. 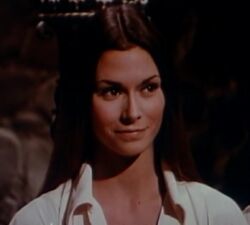 Roberta's evil smirk after her villainous reveal
Add a photo to this gallery
Retrieved from "https://femalevillains.fandom.com/wiki/Roberta_Lockhart_(Satan%27s_School_For_Girls_1973)?oldid=188683"
Community content is available under CC-BY-SA unless otherwise noted.